What Barnet Don't Want You to Know About Capita

Secrecy can be a nasty practice with people often keeping secrets for all the wrong reasons. Secrets breed mistrust. In Barnet, the Capita CSG contract has many secrets. The polite, business-like term is "Commercial Sensitivity" but we all know it is secrecy. Barnet say they want to create a sense of transparency and trust but as the saying goes "never give out all the information".


When Barnet entered into their contracts with Capita back in 2013, I, the other bloggers and local residents spent much time asking for the contracts to be made available so we could see what Barnet had signed up to. Richard Cornelius trumpeted about all of the thousands of pages of contract that were available but unsurprisingly there were some elements, the really important elements of the contract, that remained secret.

When the contract was first signed we weren't even allowed to know what was being kept secret. Chunks of text were completely redacted, with an explanation that we didn't need to know because it was commercially sensitive. There was also a patronising undertone of "why bother our silly heads with all this complicated contract stuff. The Councillors know best, just accept it".

I have read the contract, the many contract clauses, contract schedules, method statements and contract commitments, but the really important stuff, like money, has always remained secret. I regularly revisit the contract and came across a schedule that had been originally redacted in full, Schedule 23 Commercial Sensitivity. In this schedule, it sets out the duration of the confidentiality; for some items it is the term of the contract, i.e. 10 years, but for a number of items the duration is only three years.

Given that this contract was signed in August 2013 and commenced in September 2013 that means these items are no longer confidential. A copy of it is set out below: 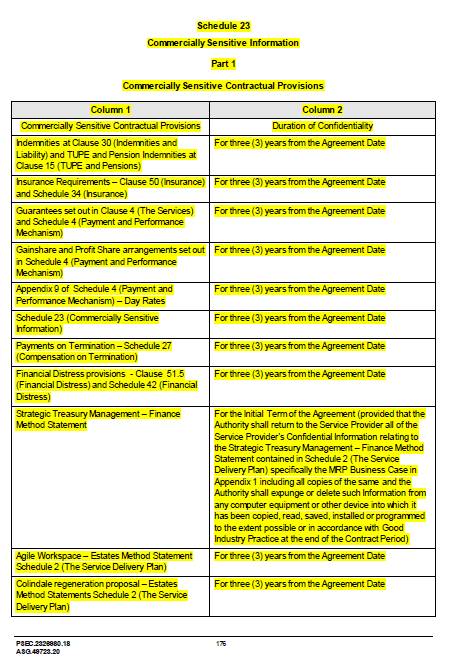 Most years I take up every residents' legal right to inspect the accounts and, as in previous years,  this year I asked to review all of the Capita invoices paid by Barnet. I will publish further blogs over the next week on some of the other matters I came across, but suffice it to say, there was one particular issue relating to the gainshare clause in the contract that I wanted more detail on.

For those not in the know, "gainshare" is a mechanism by which Capita can claim a proportion of savings they make on behalf of the council. The percentage varies but it is typically 33%. What is also important to understand is that the savings Capita claim are not retrospective but future savings paid up by Barnet in advance. At the year end they have what they call a "true-up" process where they look back to see if they really have made those savings. If the savings are greater then Barnet pays more, if the savings are less Capita make a refund. Not an ideal situation, but that what was agreed in the contract.

This year Barnet made a one off payment to Capita of £970,000 on top of the usual gainshare payments. Having challenged this payment I was told that it is something called the Agreed Procurement Price Recovery  and yes it was in the contract  (Schedule 4) but that clause is redacted. I wanted to check to make sure Capita hadn't been paid excessively and to understand what we have automatically paid in the past and what the payments will be in the future. £970,000 is a very substantial sum, not small change, so I think it is important that should be aware.

Set out below is the clause in its fully redacted state. 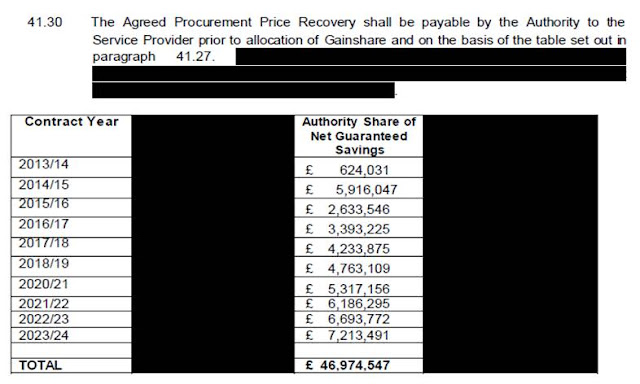 Having read in Schedule 23 that the gainshare and profit share arrangements are only confidential for the first three years of the contract, I obviously asked for an unredacted version. I also asked for a number of other clauses identified in Schedule 23 that are time expired to also be disclosed. Now just for clarification this is something written into a contract which both Barnet and Capita have signed.

After waiting almost 2 months, it came as somewhat of a surprise that Barnet again stated that the information remained commercially sensitive even though the contract says otherwise. I made it clear to the FOI officer that Barnet have a signed contract where Capita have agreed to release this information so why aren't  Barnet simply enforcing the contract? The official response I received is as follows: 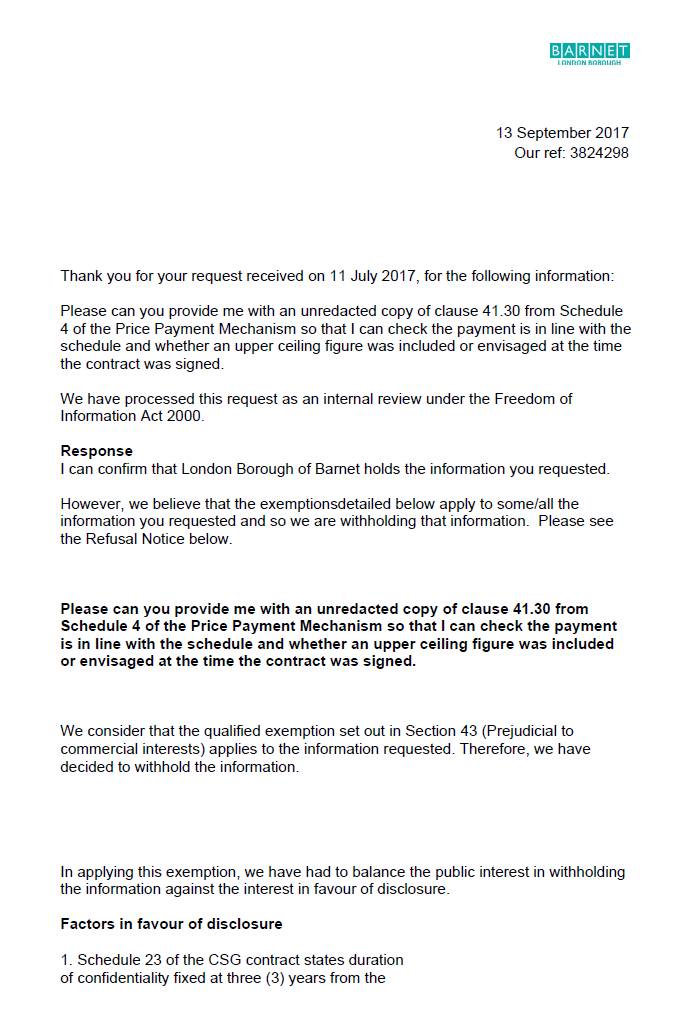 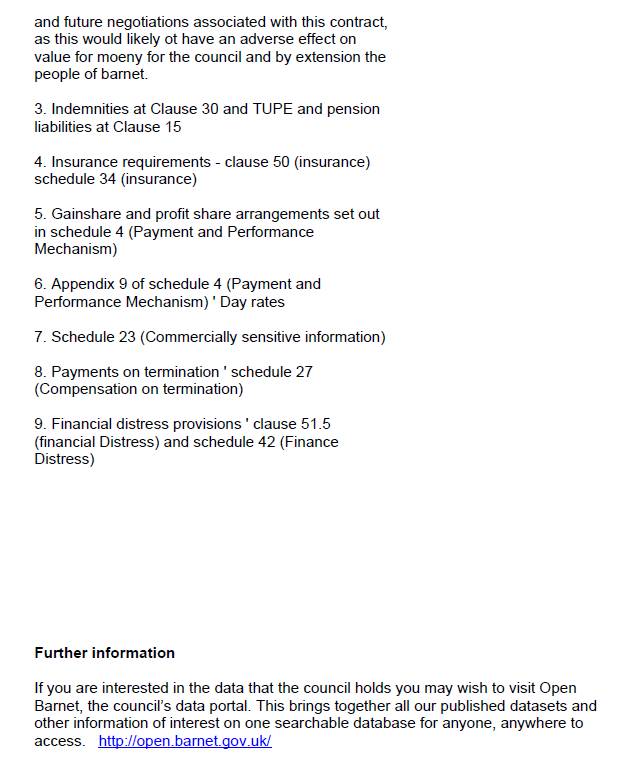 (I make no comment on the numerous spelling mistakes in the response.)

So there you have it, Capita did agree to make this information available when they signed the contract but what I have asked for is now so dangerous that it could lead to financial problems for the £2.3 billion market cap Capita PLC and lead to job losses. Bear in  mind this was before the Carillion collapse. Even so, I don't know who they are trying to fool but I think disclosing a single set of figures to me is the least of their problems.

What is also important to note is that they want to make all of the information in Schedule 23 exempt including Schedule 23 itself, which has already been disclosed. This has a Stalinist feel to it - we must forget the information we already know as it will be an offence to remember it in the future.

The matter is now with the Information Commissioners Office. We will have to see what they say, but if ever there was a time to be transparent about what a Council has signed up to, it is now. It is vital that we can understand what this private company is being paid and to make an assessment of whether it is value for money.

Update: I have just received notice that the Information Commissioner's Office that they have upheld my request for disclosure of the Capita Day Rates. I have also now received details of the contract termination terms, the gainshare payments and the Agree Procurement Price Recovery payments for the 10 years of the contract. At least we can now have some transparency as to what we are paying in extras to Capita.

Watch out for more blogs over the next week on the lamentable state of Barnet's contract with Capita.
Posted by Mr Reasonable at Saturday, January 20, 2018