Set out below are a few things I learnt at the two Barnet Committee meetings I attended this week. You may find them surprising/shocking.

The two meetings left me with no confidence in the operation of the Council and the ability to achieve cost savings. Next financial year - starting in 2 week's time - Barnet has to make £20 million of savings and we will still need to draw down £5.3 million from reserves. I remain concerned that without an accurate picture of how much we are spending on things like agency staff and the refuse reorganisation there is a very real chance the savings won't be achieved.
Posted by Mr Reasonable at Friday, March 15, 2019 No comments:

Barnet Bingate - My questions on what happened 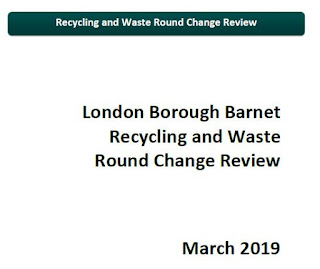 On Thursday Barnet's Environment Committee will discuss the review of the Bin Round Changes that took place in November. Click here to read the full report. Set below are the questions I have submitted which I hope will probe a little deeper into what led to the problems and why the service is now £1.75 million over budget.

How would feel knowing that the outsourced company responsible for managing Highways repairs and maintenance has 25% of posts vacant and are struggling to recruit? Is that why the highways in Barnet are so poor?  We still don't have clarity on agency staff costs and appears to have some very expensive interim staff on six figure salaries. The Council's relocation to the brand new office block in Colindale is late and they are in dispute with the contractor over costs. How much will this new building cost and how easy will it be to get to the new offices if you live in the East of the borough? Just some of the topics on which I have asked questions. As ever, I will have to wait and see if I get straight and direct answers to my questions.