Having had a quick scan through the April supplier payments over £500 at Barnet Council, a few things jump out at me. First of all, no invoice this month from Halliford Associates (Mr Travers, Deputy Chief Executive) or a number of other consultants.

Our friends LogicaCMG who have being working on the SAP system for the last 6 years were paid £961,412.57 in April. That pushes the total spent on implementing the SAP system to £22 million on a project that was originally budgeted to cost £2.5 million (see previous post)

As a footnote I see that the Sandbanks Hotel is popular again - £13,550.71. Am I the only one who wonders why there is a need to keep splashing out at this lovely hotel although why it is classified as rent in the payments seems a bit puzzling.
Posted by Mr Reasonable at Saturday, May 28, 2011 2 comments:

This week Barnet Council approved the establishment of a new organisation, a Local Authority Trading Company (LATC) to provide Adult Social Services in Barnet. This trading company will also take in Barnet Homes as a subsidiary.

The council believe that there will be significant financial benefits to this strategy although the details of the business case are hidden away in an exempt report. What really caught my eye was the Barnet Times report of the meeting where it noted:

"Councillor Richard Cornelius urged officers to keep looking at the tax implications of setting up such a body and asked them to continue to take advice to protect the council."

Now this is very interesting because setting up an LATC actually raises a number of tax risks as detailed in the Cabinet Resources Committee papers. First of all the new organisation becomes liable for VAT on all non-employee expenditure, estimated at £344,666 per annum. Unlike the Council, this VAT is irrecoverable so it is a net loss to the organisation.
The LATC may also affect the taxable status of Barnet Homes. If that does happen it has been estimated that in 2009/10 it would have meant paying Corporation Tax of £187,000 which is currently retained within Barnet Homes.

I think Cllr Cornelius is absolute right to urge officers to keep looking at the tax implications which could mean over £500,000 of very valuable revenue simply going to the taxman when it could have been spent on some of the most vulnerable people in Barnet.

As ever I remain exceptionally concerned that Barnet seem to press ahead with novel schemes which sound good on paper but which could turn into massive problems.
Posted by Mr Reasonable at Thursday, May 26, 2011 1 comment: 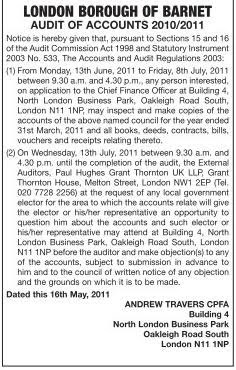 Thanks to eagle eyed reader Jaybird for the tip off on this one.

If you are unhappy with what you find, on 13 July you can question Grant Thornton about the accounts and make any objections. These dates are pencilled into my diary!

I urge anyone who is concerned about specific contracts or the way your money is spent to take the opportunity to check for yourselves and to inspect the accounts. People can't moan about the way money is spent in Barnet if they don't bother to question it. Use your rights to check and question the accounts.
Posted by Mr Reasonable at Monday, May 23, 2011 1 comment:

MetPro - SIA Licence - We had no proof and we didn't check.

After submitting a Freedom of Information request on the evening of the Council meeting back on the 1st of March I have been trying to understand who checked up on MetPro to see if they held the relevant SIA licence. On the evening my suspicions were aroused as the staff were not displaying their SIA licences which I know is a legal requirement. I asked how many of the staff were licensed. The response I received was that the council were assured they were all licensed. I then followed up this response with the questions: what proof did you have and did anybody check. The response I received this afternoon is damning:

I write in response to your follow-on request, received by us on 1 April
2011, for the following information:

1. "What proof did the council have that the Metpro officers at the
Council meeting of 1 March 2011 were SIA licensed?

2. What actions did the council take to check such officers were SIA
licensed?"

We have processed this request under the Freedom of Information Act 2000.
Under the Act we should have responded within 20 working days, I apologise
for us not meeting this deadline.

After searching the council's records I confirm we hold no information
falling within your request. Council officers were assured prior to the
Council meeting that all Metpro staff were SIA licensed, but this was not
followed up formally in writing.

What mystifies me is that a simple check on the SIA website revealed to me on the evening of March 1st that Metpro were not SIA approved contractors and a quick check on Companies House Webcheck service showed that on 10 August 2010 Companies House had applied for a notice for MetPro to be struck off.

I intend to forward this information to Cllr Lord Palmer who is chairing the Audit Committee review into the Metpro affair. I hope this inquiry will be genuinely open and will take comments from residents.
Posted by Mr Reasonable at Thursday, May 19, 2011 1 comment:

Outsourcing - a time to pause and reconsider

As many readers will know, I have very grave concerns about the outsourcing programme in Barnet. To my mind there are very real financial risks to this programme which is supported by virtually no evidence. Today, a number of the Barnet Bloggers have sent an open letter to councillors asking them to pause and review this policy before we go any further. The letter is set out below:

Time to pull back from the One Barnet Programme

Next Tuesday 17 May is the council’s AGM. As residents we see this as an opportunity for the Council to do some stocktaking and signal a change of direction.

The One Barnet Programme (OBP) was initially presented as the new and innovative approach to the future of Council services. However, as soon as the first reports were published it became clear that there was little evidence behind many of the exaggerated claims being made by the consultants paid to advise on the programme.

We are aware that many councillors doubt whether OBP can deliver the savings and improved services Barnet residents expect. We share those anxieties.

Last week saw the publication of a number of articles in the mainstream press supporting the view that mass outsourcing does not save money, is high risk, and has a negative impact on staff morale. We hope you will take the time to read the extracts from some of those articles which follow.

The fate of Suffolk County Council
Suffolk County Council last September declared its intention to become the first “virtual council”. The Chief Executive pushing this programme, under the name New Strategic Direction (NSD), was being supported by Max Wide, on secondment from BT. As you know, Wide was one of the architects of Future Shape/One Barnet.

Since announcing their intention to outsource most services, Suffolk has been dogged by controversy. In December they were accused of ignoring a £100 million overspend on a deal with BT. (See article.)

In the last few days there have been big changes in the Conservative Party in Suffolk as a result of concerns about NSD, and the scheme has been halted. The Guardian newspaper reports:

The previous council leader, Jeremy Pembroke, who helped oversee the plans... stepped down in April amid concern about the deeply unpopular changes.

An inquiry was begun into morale at the council's legal department after an anonymous whistleblowing letter, sent to councillors, and believed to be from an employee, alleged staff there had been put under "unbearable pressure". The letter refers to "the poisonous atmosphere that exists at present" in the council.

MPs were concerned that Suffolk County Council chief executive's policies threatened to "rip the heart out" of local communities. Negotiations are reported to be going on between the council and its chief executive Andrea Hill who has not returned to work after a holiday and is now reported to be on "extended leave".

Suffolk Central Conservative MP Dr Dan Poulter said he and fellow MPs had been worried about the direction the council was taking under Ms Hill.
(See the BBC interview with Poulter visit.)

Outsourcing should not be the automatic response to austerity

Outsourcing should not be considered an inevitable response to austerity. Even smaller organisations that need to gain economies of scale, and struggle to keep up with technological development, should consider collaboration and sharing with other local public services as a genuine alternative. If they do take the plunge into outsourcing, they should make sure they are aware of the pitfalls and know how to avoid them.

...It is a myth that outsourcing is cheaper, across most areas it is more expensive and people outsource for a range of reasons other than cost.
The report reveals that “when comparing the costs for any service, most elements will be more expensive if outsourced. The risks associated with benchmarking begin at the tender stage when suppliers will benefit from being experts at the process of negotiating contract terms, in contrast with the local authority that will go to market only rarely for a major outsourcing.” (More details)

The government is rowing back on mass outsourcing of public services

The BBC reported a recent meeting between the CBI and the minister for the Cabinet Office, Francis Maude, where the minister explained:

...the government is committed to transforming services, but this would not be a return to the 1990s with wholesale outsourcing to the private sector – this would be unpalatable to the present administration.

The government was not prepared to run the political risk of fully transferring services to the private sector with the result that they could be accused of being naive or allowing excess profitmaking by private sector firms. [Note of meeting by CBI]
(Read more here)

The articles above point to the folly of schemes such as the One Barnet Programme.

In the last two months the Council’s poor procurement and contract monitoring capacity has been demonstrated by the MetPro, Catalyst (legionella bacterium) and SAP cases. These have all harmed the Council’s reputation. Yet these are small contracts when compared to what OBP is proposing. With OBP the risks will be much higher.

We are asking the Conservative administration to bring OBP to a close before it is too late. Millions of pounds of public money has already been spent on consultants, with no discernible savings achieved, and the losses could well be multiplied many fold going forward. Residents and Barnet council staff are increasingly anxious about the future of Barnet council services. Councillors should be too.

Last September the Leader said “I would always listen to the community” when she reversed the decision to increase councillors’ allowances. We are asking you to listen now.

There is still time to put the brakes on the One Barnet Programme. We urge you to do so.

I urge all Barnet residents to ask their councillors to think again, to consider if the evidence in place supports such a huge financial gamble, and to be brave enough to stop this scheme now before even more money is wasted.
Posted by Mr Reasonable at Tuesday, May 10, 2011 1 comment: