Barnet Supplier payments have been published early this month because of Christmas so we can have a festive peep at how much suppliers have been paid between April and November. So far this year Capita/Re have been paid £51.5 million in 8 months with a year end target looking like £76 million - so where are the savings? 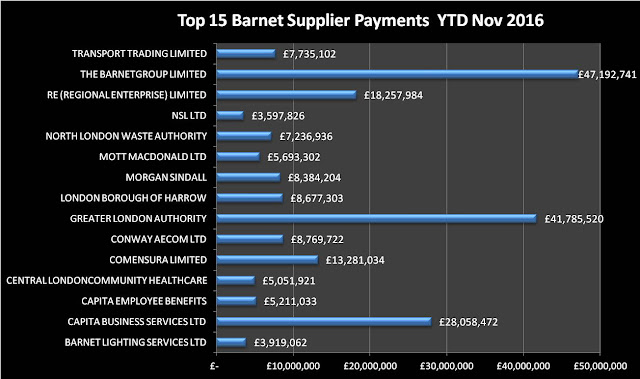 The contract for agency and interim staff (Comensura) continues to grow. In October it looked like they were getting costs under control but in November the costs were just a shade under £2 million for the month so still on course for a full year spend of £20 million. 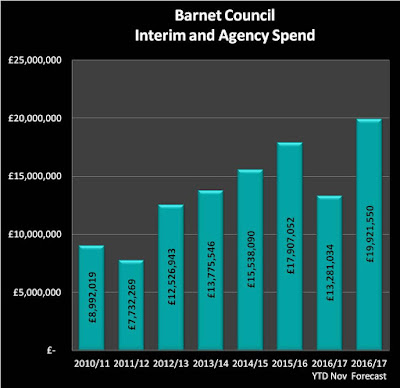 This remains nothing short of a disgrace despite all of Barnet's protestations. While two thirds of the agency spend is on Adults and Children's Family services, one third, or around £700,000 in just one month was spent by the Commissioning and Streetscene departments. What I can't understand is why Capita who the Council pays to run the HR department haven't got to grips with this problem and come up with some more innovative solutions to address the recruitment problems that necessitate so many interim and agency staff. 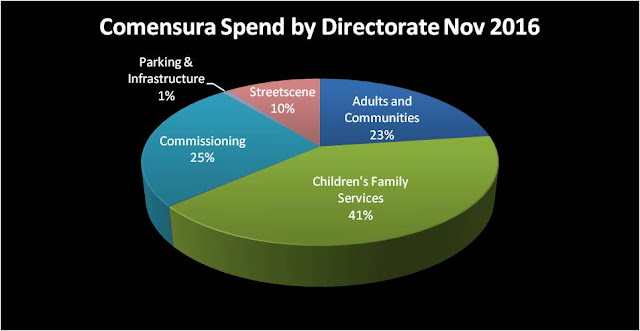 Barnet are currently undertaking a budget consultation exercise for next year's budget. Unfortunately the council want to cut key services like our libraries, meals on wheels and children's services to meet the £22.2 million budget gap next year but seem unwilling to get to grips with this interim and agency staff bill which is running out of control at £20 million a year. I would also say that much of this budget shortfall is of Barnet's making. They have frozen Council tax since 2010 and actually cut council tax in 2014, weeks before the election. If they had been sensible and taken modest council tax rises of 1.99% each year then we wouldn't have this shortfall.

Barnet continues to be a council driven by political dogma rather than common sense and that is to everyone's regret.

Posted by Mr Reasonable at Friday, December 23, 2016 No comments: