I have written a number of blogs about the amount Barnet Council spend on Agency and Interim staff as published in their monthly supplier payments. "Does it matter?" you may say. Well from my perspective yes it does.

The commission payments on the agency costs are significant and numerous.We pay a commission to the originating employment agency, a commission to Comensura, one to Eastern Shires Purchasing Organisation through which the Comensura contract was let,  and a gainshare payment to Capita.

This year it looks like spend on agency costs will exceed £20 million. I reckon that we are paying at least 10% and probably closer to 15% (or higher), so between £2 million and £3 million in commission. That is money that generates no benefit - simply profit for all the intermediaries between the member of staff and Barnet Council.

In addition, there are a significant number of interim and agency staff who are paid at consultancy day rates significantly above the typical salary for that post. Lastly, there is the cost of having to go through a series of different people each time the interim moves on, something which I raised at the Performance and Contract management evidence session and something which even Conservative councillors agreed was a problem. 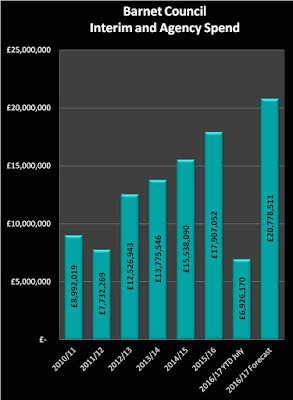 So why raise this again now? Well this week 46% of Barnet's librarians have been told they are being made redundant to save around £2.5 million, a sum very similar to the commission being paid on agency staff. This demonstrates to me that Barnet Council have completely lost the plot when it comes to setting spending priorities.

In the past I have been told that the reason for the increasing agency spend is because of the inability to recruit social workers. While that may be part of the problem, scrutiny of the evidence suggests that use of agency staff is endemic across several departments. In the latest detailed analysis of the Comensura spend in July 2016 £419,000 was spent on agency and interim staff in the Commissioning department and £227,000 was in Streetscene.

The graph on the right illustrates just how much agency and interim spend has grown since the concept of One Barnet was dreamed up. The spend doubled between 2010/11 and 2015/16 and is set to grow further this financial year at a time when more and more staff are being made redundant and that just doesn't make economic sense.

Posted by Mr Reasonable at Wednesday, September 14, 2016 No comments:

Barnet's July supplier payments have been published here and it is generally a light month with total spending at just £29.9 million. The one payment that does jump out is Comensura who supply the council with agency and interim staff. In July they were paid £1.86 million and this brings the total for the first four months of this financial year to £6.9 million. On that basis it looks like Barnet will hit £20 million for spend on interims and agency staff this financial year. This is completely unacceptable given that we are paying commission and agency fees on all of those payments.  If we are paying 10% commission on this agency spend - and I suspect it is significantly higher - then the commission alone is is almost as much as the Council are planning to save by destroying our library service. Not only that but the lack of continuity by employing an never ending stream of interims and agency staff leads to inefficiencies and the same mistakes being repeated time and again. I have questioned Conservative councillors about this on numerous occasions and they entirely complacent on the matter. Having outsourced so many services it seems ridiculous that so much is being spent on temporary staff.  Richard Cornelius is the leader of the council and the buck stops with him. He has to get a grip on this massive problem. 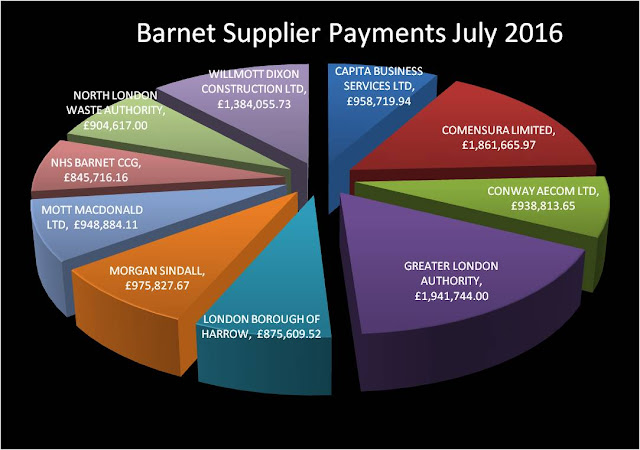 Posted by Mr Reasonable at Thursday, September 01, 2016 No comments: