The Politics of Bins, Rubbish and a Collapsing Depot

Last week the Environment Committee held a very full meeting under the new gagging rules. No public speakers and severe restrictions on questions. Barnet Tories have achieved what they want - no public scrutiny. The agenda was stuffed to the gunwales, two public questions on one item limited to 100 words, no opportunity to speak, same answer to both questions, yet there were so many other issues.

If you live in High Barnet you may be unhappy to learn that Barnet have agreed to give 100 resident parking permits to Barnet General Hospital for their staff to park in residents bays as the hospital's staff car park is full. Interestingly, the no public speaking rule was waived to allow someone from Royal Free Trust to speak about their plans and justify why this should go ahead. Apparently there are plans at some stage to build a multi storey car park  but they need this proposal to meet an immediate need. Labour councillors had asked for a review of the CPZ to be undertaken before these new permits were introduced to get local residents views but the Tories were keen to push it through and undertake the review once the hospital had been given the 100 permits. It also touches on a broader issue which is that many of the staff at Barnet General simply can't afford to live in Barnet and hence have to drive in from lower cost areas. This is a problem that is only going to get worse and highlights the failing in the Council's affordable housing strategy (what strategy?)

Onto another serious matter, the review of the Reduction and Recycling Plan (RRP). This is a plan Barnet were required to produce in conjunction with the GLA because of Barnet's withdrawal of the food collection service last year. It has taken a long time to get this report, and I have to say I found it very interesting. It highlights that Barnet is slipping down the rankings in recycling rates from 11th to 15th of the London boroughs with most of the lower ranking boroughs being the inner London ones.

What the independent consultants report identified was a series of options ranging from the status quo plus food waste collection to fortnightly collections of general and recycled waste. 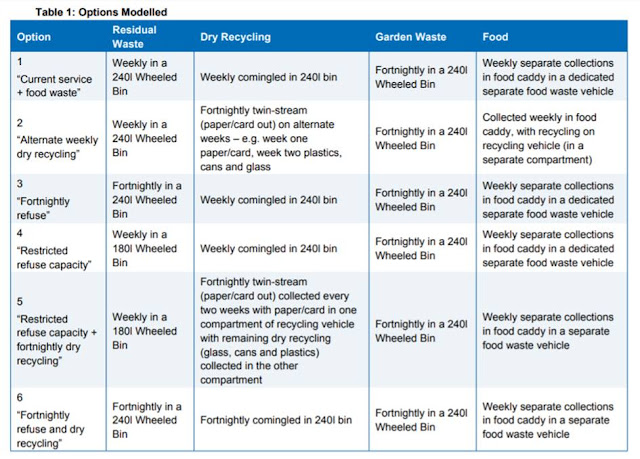 The options also looked at the introduction of charging for green waste collection at a cost of £35 or £50 per annum, something that was mooted last year and has yet to be confirmed.

What the study did reveal was that simply adding back in a weekly food waste collection service would cost an extra £1.26 million a year. I found this somewhat surprising as the justification for its removal was a saving of just £300,000 a year. So scrapping a service which will now have to reintroduce by 2022 at the latest has cost us at least an extra million quid. This is because they have bought 16 new refuse vehicles, 4 in October and another 12 last month at a total cost of £3.2 million. However, these new vehicles cannot collect the food waste separately on the same vehicle (which is how they previously operated the service) so they will have to buy and operate a new fleet of dedicated food waste collection lorries.

What the report also shows is that the option of weekly food and recycling collections with fortnightly general waste collections (Option 3) could save over £400,000 a year and boost recycling rates from the current level of 34.6% to a respectable 48.2%. While this seems like the most sensible option, in Barnet sensible doesn't cut it. The Tory party manifesto focused on keeping weekly bin collections in spite of the fact that three quarters of English Local authorities have already moved to fortnightly (or even less frequent) collections.

This report does include the treatment costs of waste and it confirms what I said last year that anaerobic digestion of food waste will continue to be significantly cheaper than burning it with the general refuse. Interestingly, last week Barnet also published a report on the cost and savings generated by the refuse rounds reorganisation when the food waste collection ceased. That shows a net saving of just £335,000 but ignores the additional cost of waste disposal. Add that back in and the savings fall to just £50,000. That looks like an incredibly bad decision now that we know we will have to reintroduce food waste collections at a cost of £1.26 million.

What caps all of these problems off is the continuing subsidence at the new Oakleigh Road depot. This is a scheme that was rushed into at great expense even though it was inadequate for our needs resulting in Barnet having to rent additional depot space from Harrow Council. Capita project managed the depot delivery at this site even though it was known for problems with subsidence. Within weeks of the depot opening cracks began to appear and the problem has simply got worse. Some cosmetic repairs were done filling in the cracks  but the problem has never gone away. At last week's meeting it was announced that the problems had become much worse over the summer and that major works were now necessary as a matter of urgency. This will need to start in November, taking six month to complete and is likely to cause significant disruption including weekend working, reduced number of vehicles at the depot and use other satellite depots. There are likely to be additional costs over and above the remedial works, such as the extra costs of renting space, paying staff to work weekends etc. but it is not clear who will be picking up the tab for these costs and as the officer said they will be "part of a commercial discussion" as to who pays. Willmott Dixon are the builders but I cannot understand why Capita who were responsible for project managing this scheme  and have been paid a large sum on top of their core contract fee, allowed this to happen and to drag on for such a long time that such serious and disruptive works are now necessary.

As ever, we will never get to the bottom of this saga as Barnet hate any form of criticism of them or their contractors.

Posted by Mr Reasonable at Sunday, September 15, 2019 No comments: