Agency and interim staff cost Barnet Council a great deal of money. By my calculation it amounted to just under £20 million in 2016/17. Traditionally a council's relationship with an agency staff member would be as follows: 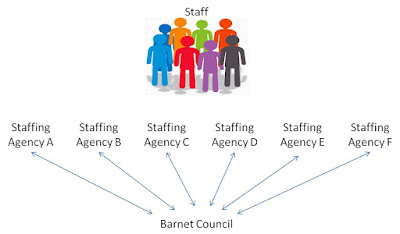 This would involve Barnet dealing with lots of staffing agencies separately and paying bills from each agency. Barnet would also need to negotiate commission rates with each agency separately, which is a time consuming and complex task. To overcome this problem many public sector organisations use what is called a neutral vendor. In Barnet that neutral vendor is a company called Comensura. They do not supply any agency or interim staff themselves, they simply act as a consolidator, collating and managing the relationship between staff agencies and the Council. Comensura negotiate rates and charges with agencies. 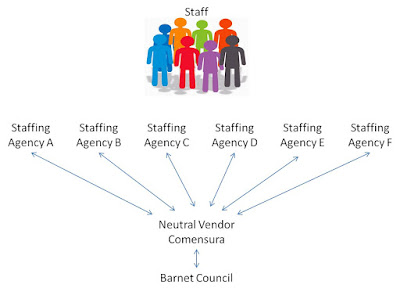 The original contract with Comensura was agreed at Cabinet Resources Committee on 20 June 2012 and started on 1 October 2012 for a period of three years with the option to extend for a further year. It was sourced through the Eastern Shires Purchasing Organisation on a framework contract (one that has already been agreed) and ESPO take a small commission on every hour of agency staff used.

Gainshare Savings Real or Illusory:
In the original tender process, a tender price was submitted by Comensura but the following statement was made at point 9.10 in the tender evaluation report.

“Each of the bidders has identified but is not able to quantify additional cash savings that could be achieved during the implementation phase of the contract when further pay rate benchmarking will be carried out and the baseline value of the contract has been set by Comensura.

In 2015 in the contract extension report it noted:
“Comensura and the procurement team have identified short term additional savings benefits in year by reviewing long tenure agency employees; those engaged for longer than 3 months a year on short term contracts and are working towards a reduction of these”. This was also driven by a change in HMRC rules to stop agency staff avoiding tax and national insurance.

Hopefully all is clear up to now. Now we get to the main issue. As soon as Capita took over the CSG contract they claimed a gainshare on this Comensura contract. Since 2013 Capita have claimed several millions (I estimate c.£3 million) in gainshare payments on this contract.

Fundamental to Capita’s gainshare claim that they “negotiated” further savings is whether these were in addition to the savings identified but not quantified or  simply a quantification of the savings that Comensura had already identified or that Comensura subsequently generated. This is a critical point as the majority of gainshare payments made to Capita relate to this one contract. 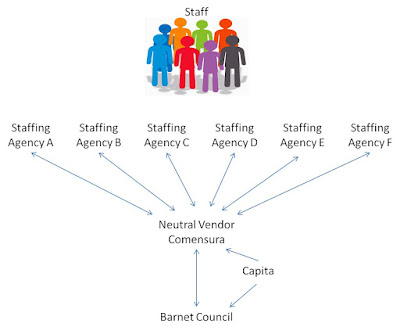 I have asked for the evidence that Capita did generate these savings but this has not been provided. I have received a redacted copy of the original LBB Procurement Board Project Submission (attached below) but this merely serves to question whether the savings have been realised given that the cost of contract has risen from £12.53 million in 2012/13 to £19.88 million in 2016/17. 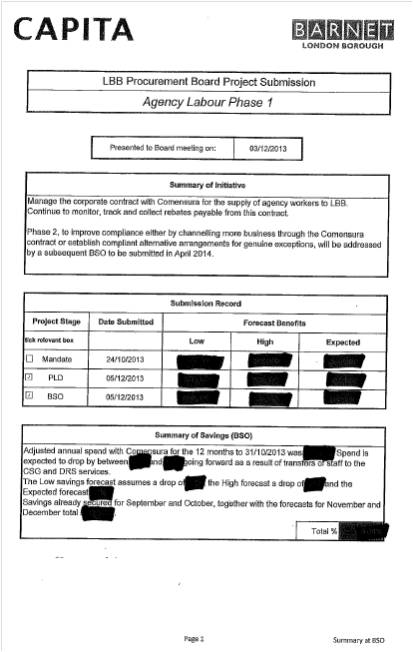 Latest Contract Extension:
Under the terms of the original Comensura contract it was let for a three year term with the option to extend for one year only.  As I see it, the latest contract extension in September 2016 cannot be an extension, it must be a new contract. As such, even if the gainshare payments on the original contract were valid, which I do not believe they were, I do not see how they can be extended to the new contract commencing in September 2016. However, Capita are claiming gainshare for the entire financial year to March 2017.

Overall, we are paying commission to four different organisations between the wages and on costs of the staff member and what Barnet Council finally pays. 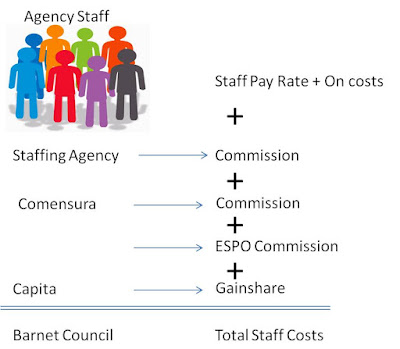 Now I don't know how much negotiation took place, whether the savings are real or not but this gainshare has been a massive money spinner for Capita. The gainshare they have claimed could, for example, have been enough to offset all of the library cuts. As with the other contract gainshare examples I have raised in the last three days, by claiming large savings, it triggers the ability for Capita to claim the Agreed Procurement Price Recovery Payment (APPR) which this year was £970,000. I have been prevented from seeing what the APPR was in the three previous years of the contract but is likely to be as much or more than this year's payment.

Again, I raised this with the external auditor back in July last year but six months later have still not received a response.

I raise this because, at a time when the council are consulting on further budget cuts, Barnet are writing out very large cheques to Capita under this catch-all gainshare clause. It shocks me that the council are happy to cut vital services but aren't prepared to challenge Capita on this matter, but that is the Barnet way.
Posted by Mr Reasonable at Thursday, January 25, 2018