Will cuts to Council Tax Support work or are we forcing even more people into poverty?

Starting in April, benefit claimants in Barnet will have to pay a contribution toward their council tax. Details of the scheme can be read here. This is a central government policy to cut the council tax bill by 10% and supposedly to incentivise people back into work. The net effect for Barnet is a cut of £3.7 million of central government grant towards council tax benefit so the council can either absorb the cut (which according to the LGC around 25% of council have opted for so far) or get benefit recipients to pay.

The new system to be implemented in Barnet will mean that benefits claimants will have to pay at least 8.5% of their council tax out of the benefits they receive. Interestingly, the Council's own report says,

"There will be an impact on working age claimants who in the past have been effectively exempt from paying Council Tax and will in future be expected to pay a portion of their Council Tax liability. There is a real risk that a significant part of this segment of population will be unwilling to pay any contribution towards their Council Tax bill, leading to an increase in customer contact, appeals and complaints, and higher levels of bad debt."

I think this is a bit tough to say some people will be unwilling to pay. I suspect the reality for most is that they will be unable to pay which is fundamentally different.

Reading through the papers for tonight's Budget and Performance Scrutiny Committee meeting it examines the performance of Barnet Homes and highlights that 38% of all Barnet Homes tenants are in arrears (according to company accounts these arrears were £1,327,484 at 31 March 2012). If so many people are in arrears already, then surely asking them to contribute towards their council tax will make matters even worse. But this affects many more people than Barnet homes residents. In total 32,000 Barnet residents are in receipt of Council tax benefit. However, the proportion of claimants who are of working age has been declining over recent years and this trend is likely to continue with an ageing population. Since pensioners are exempt from any new CTS scheme, the impact of any measures to collect a portion of Council Tax will increasingly fall disproportionately on those of working age. In Barnet the 5,000 working age benefits claimants who have hitherto received 100% Council Tax Benefit, will be hit hardest.

The Council are using the powers given to them to do away with the discount for second homes and properties that have been vacant for two years or more to try and offset this pressure on benefit claimants. However the impact will be significant especially on larger families who occupy larger houses. There is a transitional phase for the first year but after that it appears that larger families might be as much as £25/week worse off.

Although pensioners on benefit are exempt from the scheme, those elderly who, for example, are in hospital for a prolonged period and currently apply for the empty property discount will no longer qualify.

Now Barnet did carry out consultation but as ever it asks those motherhood and apple pie questions to which no one can object to justify implementing the scheme. Yes of course people want a scheme that is fair and that those who can afford to pay make some contribution but for those on benefit the current scheme does not seem particularly fair at all. 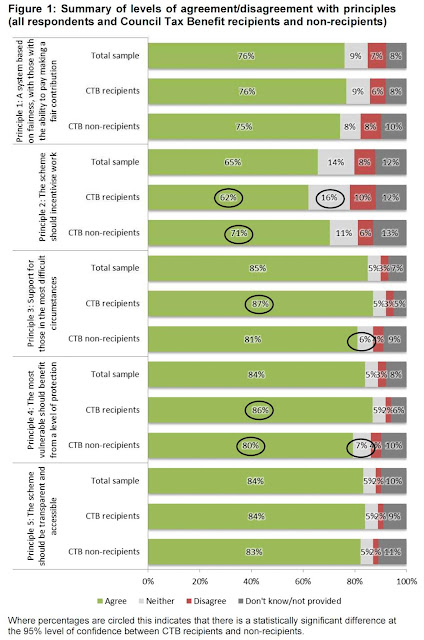 The Daily Mail contingent might say well all these "scroungers" should pay and people on benefits receive far too  much money anyway. My experience of people I know who are in receipt of benefit is that life is anything but easy and their budgets are incredibly finely balanced; even a small unforeseen problem can mean they run short of money for food or utilities. But forget what I say. An arch Tory, Lord (Patrick) Jenkin who was the architect of the Poll Tax has come out in a BBC interview and said,

"The poll tax was introduced with the proposition that everyone should pay something, and with the present structure of society it doesn't work. We got it wrong. The same factor will apply here, that there will be large numbers of fairly poor households who have hitherto been protected from Council Tax, who are going to be asked to pay small sums." He also said the government needed to prepare for a "backlash" when the cuts came into force.

Officials at one London borough  have described the change as "likely to have a disastrous impact on the levels of child poverty". Laura Wale, money adviser at National Debtline, said she would expect "a lot more people to have liability orders" if local authorities stick to their current procedure of enforcing outstanding bills through bailiffs within their usual timescales of one to three months. She says councils will have much more discretion than previously to slow down their enforcement procedures to enable people to find work or search for some other solution. However with Capita taking over responsibility for Council tax collection in Barnet from April, and having given specific guarantees on the collection levels, I suspect they will not show the same level of discretion as other Councils.
Ironically in the first year of operation these changes will generate savings that exceed the cuts by around £500,000. The Council say they will use this surplus to establish a Crisis Fund for those most affected by the changes. Given that the government has put in transitional relief for just one year of £600,000, there is a very real chance that next year the 8.5% contribution level will have to increase and that the Crisis Fund will disappear.

If Patrick Jenkin thinks this strategy is a mistake then perhaps Barnet should be listening to him and coming up with other ways to meet the shortfall - or telling Eric Pickles that he is mad. Sadly, as ever, it will the be the poorest and most vulnerable who will suffer most.