I have spent the last eight years trying to get Barnet Council to act in a more financially responsible manner. Last night we saw just what a policy of constant Council Tax freezes and poor management has done for Barnet finances. I blogged about this last week which set out my concerns and the questions I had submitted to the Policy & Resources Committee. Last night I got answers, although not to the questions I had asked. That is the Barnet way and something I have come to expect.
You can read the answers here but to be honest they tell you very little.  In summary:
One of the biggest problems is the failure to put up council tax since 2010.  I have been suggesting modest rises since 2010 but I also came across a video of a Budget Overview & Scrutiny meeting back in September 2012. It illustrates how back in 2012 Cllr Dan Thomas was already considering an increase but was somehow persuaded to introduce a freeze instead. If Cllr Thomas had stuck to his guns then we wouldn't be in such a mess now. (Credit must go to the late great Barnet Bugle, Dan Hope, who recorded so many council meetings and who we all miss very much.)


I have set out below the speech I gave to the committee, Labour councillors listened and I was pleased that they proposed an additional recommendation to consider bringing strategic finance back in house, something which will be considered at the new July meeting.


This is a financial mess and nothing in this report shows me how you are going to get out of it. We need to make massive savings quickly but all I see is inertia. From where I am sitting Barnet looks to be on the same trajectory as Northamptonshire County Council. Decimated services and mass redundancies. Rather than spend my 3 minutes going through the reason as to how you have got us in this mess I thought it would be more constructive to give you my views on how you can try to address the problem.

Put a ban on all new recruitment without CEO or 151 officer approval.  It mentions it in the report as a possible option but it needs to happen straightaway. Force HR to come up with a clear plan of how they are going to cut agency costs to 2010/11 levels (£9m). Review the flash figures for payroll within three days of month end and challenge any unbudgeted spending immediately.

Take a leaf out of Northamptonshire’s restructuring playbook for financial control and implement an independent procurement panel to review all expenditure over an agreed limit of say £10,000 including all Capita special projects. You also need to get a much stronger grip on capital spending . If you can cut capital projects to balance the books then maybe they shouldn’t have been approved in the first place.

Renegotiate the Capita and Re contracts with the first target being the gainshare arrangement which appears to be a licence to print money, £23 million on procurement alone. The financial function isn’t delivering and right now you need a clear joined up financial perspective with timely and accurate reporting. The logical solution to get that control is to bring it back in house as quickly as possible.

The Barnet Group has a large duplicate management structure including CEO, Finance Director right down to a duplicate FOI department. Five separate boards 20 different board directors. Barnet homes management costs are £21.1 million yet operational costs are half that. Re-integrating Barnet Group within the council structure could rationalise the management and duplicated admin function taking out a significant chunk of those costs as well as providing a more integrated and efficient service for users.

You duplicate many roles by having commissioning officers on 6 figure salaries and then pay Capita, Re, Cambridge Education etc for senior management to implement services. This needs a radical overhaul which I suspect will mean bringing more services back in house.

This isn’t about political dogma it’s about plain speaking  common sense, something which has been absent for a long time in Barnet. 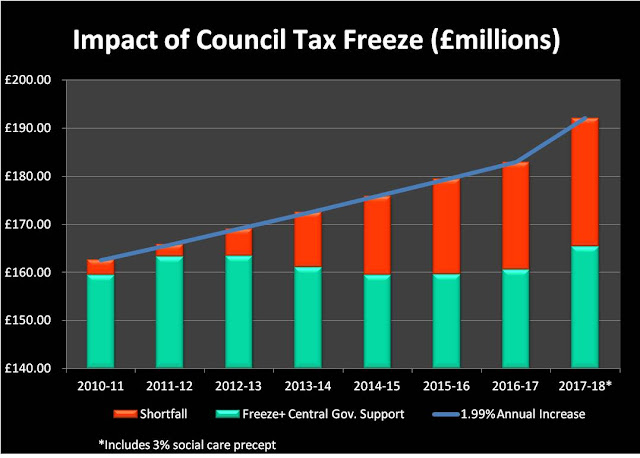 "I will pledge to give up 4 hours of my time every month to scrutinise and challenge all invoices over £10,000 to help the Council reduce unnecessary spending so long as five other people will make a similar time commitment to sit on the panel and that Barnet Council will genuinely participate in the process and listen to the advice and opinions given."
Read about it here
Posted by Mr Reasonable at Tuesday, June 12, 2018