Graph of Doom - Fact or Fantasy - An Alternative Perspective

Barnet Council have been pushing a chart (set out below) which has gained the rather unpleasant title “The Graph of Doom” to show how the Council will run out of money for any services other than Adult Social Care and Children’s Services by 2030. This chart has been used in Cabinet documents to justify the need for the One Barnet Outsourcing programme. It has also gained traction in the national press where it is seen as a revelatory document which we should all be accepting as the gospel according to St. Barnet. 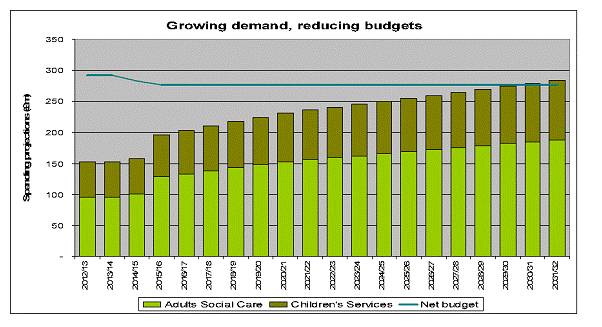 As someone who is a great believer in the ‘sniff test’, I sniffed this chart and detected an odour, something just didn’t seem right.  I look at a lot of charts and business plans and over the years I have found that it is very unwise to accept things on face value simply because someone tells you it is right. I do not claim to be a local government finance expert but I have tried to take a logical and analytical approach.

As a starting point I thought it was essential to understand just what where the assumptions behind this chart and what were the figures they had included. After a series of email, Freedom of Information requests appeals and discussions I finally received all of the data.

I have set out below the assumptions used by Barnet Council to come up with the figures followed by an alternative view of how they might be interpreted. I have assumed throughout that all figures are net of inflation

I start with Net Budget, the line at the top of the chart. Barnet states that between now and 2017 they have assumed that there will continue to be cuts in Central Government funding. True until 2015 when we have a general election but unclear if it will continue if there is a change of government.  However, after 2017 no one knows what will happen so Barnet have assumed that the cap of £277 million of Central Government Funding and Council Tax will remain static until 2032.

I would seriously challenge if that is a credible scenario. Are we realistically saying that government will not increase funding for 15 years?  I also asked about the growth of income from Council Tax revenue. Barnet say that at the minute growth in council tax income is equalised by the government reducing their level of grant. However that rule changes next year so boroughs may be able to keep some more of the Council Tax they raise. The Government have introduced the New Homes Bonus and Barnet have been allocated £3.13 million in the first two years but that does not appear to have been reflected in the assumptions.

In Barnet there a number of major development schemes with the number of households is expected to reach 167,000 by 2026. This equates to a growth of around 1,800 households per annum every year. Assuming the average household will be in Council Tax Band D this would generate net income to Barnet of just over £2 million per annum rising by that rate every year till 2026. The Government may seek to recover some of that but given the assumption is that they are not going to provide any further increase in those 13 years is it realistic to also assume they will cut what would be an additional £26 million per annum before inflation by 2026.


To underpin this argument I identified that Barnet have also assumed that the population will grow by 85,560 over the next 13 years which is an increase of 24%. Is it plausible to assume that the council can provide services to an extra 85,000 people with no extra money? That is like providing services to a town the size of Stevenage with no extra money. In my view this is simply not a rational assumption and undermines the credibility of the graph.

Next I looked at Children’s Services.  The current level is £57.57 million and is forecast to rise as the number of children in Barnet grows. However, in 2014/15 the costs rise by 5.42% and by 11% in 2015/16. This does not appear to be borne out by the population growth assumptions. We are currently at a peak for the 0-4 age group and that may be reflection that we also have a peak in the 25-34 age group, those most likely to have children.  Interestingly, if this is the prime group for producing children then we should be anticipating a decline in new births for the next 21 years from existing Barnet residents and the growth will only come from new residents moving in from outside the borough. 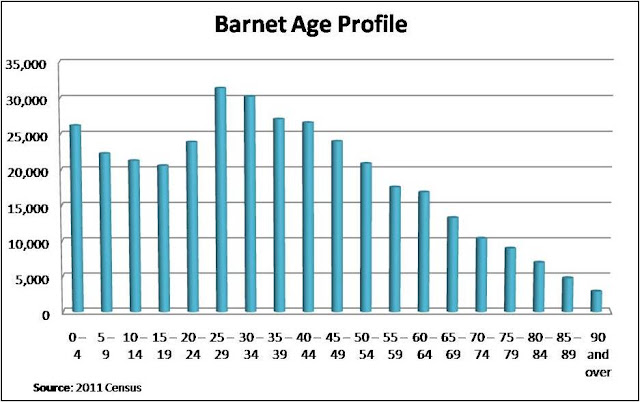 As such, a reasonable conclusion one could draw is that children’s growth will run at no more than the overall population growth. There is also no consideration of the impact of cutting housing benefit and changing the housing waiting list priorities (which favour people with a connection to the borough) on the growth of families in Barnet. These need further analysis and forecasting. I have therefore assumed that the cost of children’s services will grow by no more than the forecast in population growth.

For Adult Care Services the current budget is split between 4 categories. 17% is for voluntary organisations, supporting people and assessment budgets. 39% is for the under 75 budget, 32% is for the over 75 budget and 12% covers management and overhead costs not linked to the population growth. Included in the Barnet assumptions is a massive increase in 2015/16 of 25% above the standard population growth rate. This equates to just under £25 million and is attributed to the introduction of the Dilnot reforms. Given that the focus of this will be in the over 75 age group this suggests that the current budget of £31.5 million will increase by £25 million an increase of 79%. If you consider that Barnet’s over 75 population makes up 0.0577% of the over 75 population in England and that the Dilnot Commission estimate the total annual cost will be £1.7 billion that suggests that even if the local authority bears all of the cost and that central government bears none of the cost, that would be no more than £9.8 million increase for Barnet compared to the £25 million shown in the graph. I have maintained all of the Barnet adult care growth other than the excessive Dilnot Commission increase. 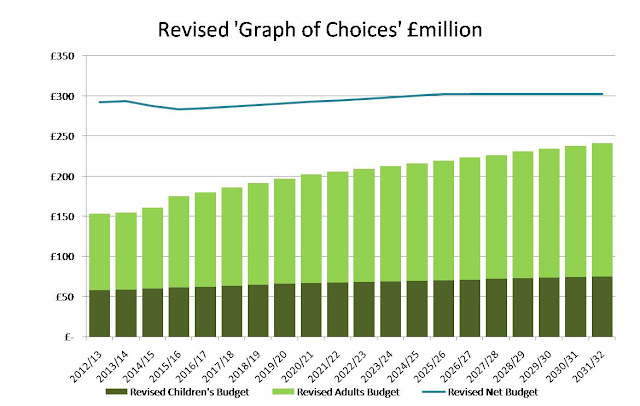 However, no consideration has been given to small real increases in Council Tax. The council held a “Corporate Plan Deliberative event” as part of the 2012/13 corporate plan and budget consultation. It showed that residents were not opposed to rises in council tax where the need was clearly communicated and transparently recorded. In general they did not want any further money spent on improving refuse collection, roads and pavements. Clearly Adults Care and children’s services do not fall into this category so it is reasonable to assume that if the need were explained to residents they might accept a small increase to fund these services.

If you include a 1% annual real increase in council tax (which makes up 55% of the total net budget) the chart below illustrates that the gap drops from £138.6 million to £94.7 million. Still a decline, but it is a difference of just over £100 million per annum in 2031/32 between my assumptions and those used by Barnet. This 1% increase would also fall within the limit set by Government for council tax rises (assuming inflation rises by no more than 2.5%) before which there has to be a local referendum. 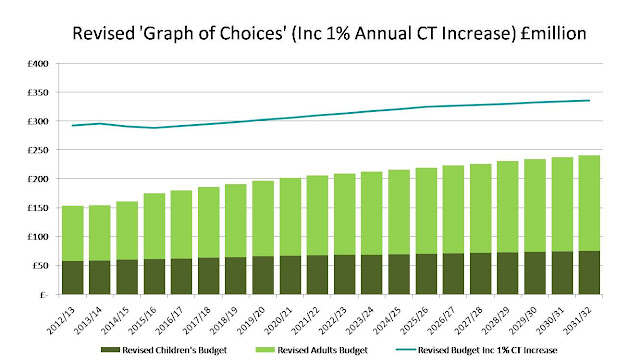 Overall, my analysis of the issue suggests that whilst there clearly is a challenge in the rising cost of adult and children’s services, it is not as significant as made out in the ‘Graph of Doom’ and should definitely not be met with dramatic cuts to services before all other options have been considered.  I have raised serious concerns about the assumptions Barnet have used and have put forward an alternative perspective.


I hope my revised ‘Graph of Choices’  starts a constructive and meaningful dialogue between the Council and residents into what choices we need to be taking to secure the best possible future for all of our residents.