Is Peterborough the new Luton - Barnet outsources its homeless 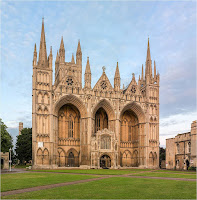 “Peterborough is a growing city in the heart of rural east England with a population of approximately 200,000. The city and its region have an important place in the history of Britain and modern Peterborough is thriving.”

Wages in Peterborough are below the UK average but it is nevertheless a growing city.

So what you may ask? Well clearly the officers at Barnet Council think Peterborough is a great place to live because the Council are spending millions buying property there. With an official duty to house the homeless in temporary accommodation and with property prices growing ever higher in Barnet, the Council decided in May 2017 to spend £8 million buying properties outside the borough. Relocating people out of London isn’t something new. During 2015/16, 233 households were placed outside of London by Barnet Homes and Barnet purchased 48 properties of which 28 were in Bedfordshire - many in or around Luton.What’s new now is that Barnet are spreading the net much wider and further away from Barnet. These new properties will be let and managed by Barnet Homes.

Delegated powers reports reveal that 30 properties have been purchased so far of which 23 are in Peterborough. For those families who are housed there “temporarily”  it may be that they are glad to be in such a thriving, growing area. But I suspect that for many the 76 miles may seem a long way if they have children in school, or jobs, or a support network of family and friends in Barnet. 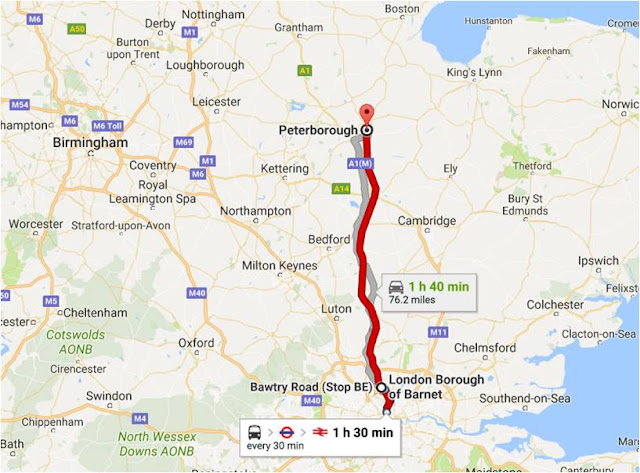 In the original report presented to the Policy and Resources Committee Barnet Home provided a summary of the housing situation in Barnet which makes grim reading and illustrates the failing of the current housing policy. 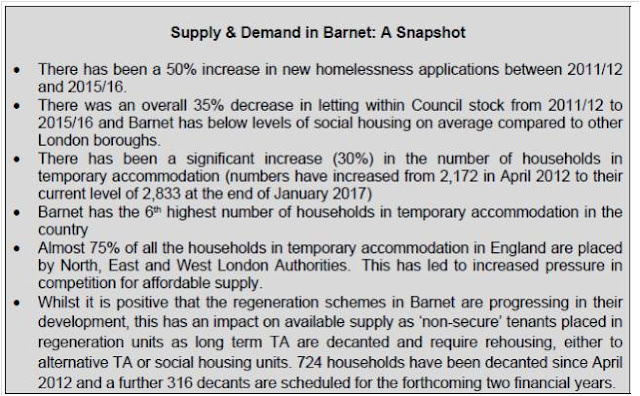 Interestingly the officer's report states that "women and members of Barnet’s black and minority ethnic communities are over represented among those living in temporary accommodation. Over 70% of households in temporary accommodation are from non-white households, compared to around 40% of the Borough’s population as a whole. Of those in temporary accommodation the main applicant is female in 65% of households." However the report also states that "a full equalities impact assessment was completed for The Housing Strategy 2015-2025 which identified that the Strategy would have a positive impact on all sections of Barnet’s Community". I struggle to see how shipping single mother families so far from Barnet is a positive step.

But I am sure you will all be saying "but it must save a fortune?" Well the report suggest otherwise.
Existing temporary accommodation rental rates mean that for each new household placed in 2-bed emergency temporary accommodation costs the Council almost £2,400 net per annum. With bad debt provision and management costs factored in, this figure increases to approximately £3,400 net per annum, per household. Where rental properties are sourced outside London, these costs reduce significantly, however it still represents a net cost per unit of almost £1,900 per annum at current prices. By comparison, buying properties saves a whopping...... £3k over 30 years once borrowing costs are taken into account.

I am not an expert and if I have got this wrong please let me know but simplistically this is my understanding. The reason the saving is so small is that Local Housing Allowance in Peterborough is £115/ week compared to £255 in Barnet. This means that while rents in Barnet are high so is the Local Housing Allowance the government pays. The difference between the two is what Barnet pays.  So, yes, buying cheap property in Peterborough saves the general tax payer money in housing benefit but the savings for Barnet are comparatively modest.

That is where I might have ended this blog but as you will be aware I am interested in the details.  In the original report it stated that the best case for refurbishment costs and fees would be £23,669 and worst case £31,890.

So when the Delegated Powers report was published with the decision maker designated as Barnet's Deputy Chief Executive, the figures told a different story. 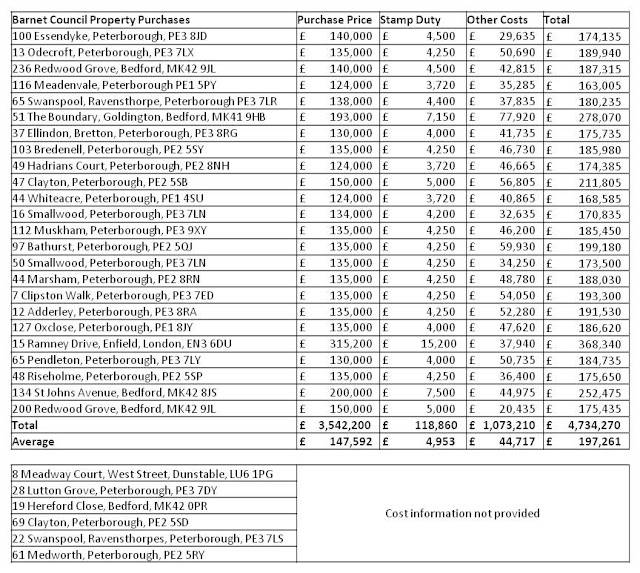 Only one property came in at or below the best case for other costs and fees and another came in just below the worst case estimates. The other 22 properties all exceeded the worst case and in total the average other costs came in at £44,717, £21k above the best case and £13k above the worst case. Even taking into account lower purchase prices, the average cost is still £11k above the worst case total cost. This matters because the savings set out in the business case justifying the relocation of families so far away from Barnet are relatively modest and at this level it calls into question whether this is a viable policy.

When I tried to ask Barnet Council for more information about these other costs they waited until my FOI was overdue and then told me Barnet don't hold this information and that all housing matters are dealt with by Barnet Homes. Well I for one hope that Cath Shaw, Barnet's Deputy Chief Executive, does know why these costs are exceeding the worst case and if she doesn't then that makes me worry even more.

Lack of affordable housing is one of Barnet Residents' biggest concerns. Barnet Council don't want poor people and are happy to ship those families most in need to Peterborough. We need a radical change but shifting the problem to another borough 76 miles away is not the answer.
Posted by Mr Reasonable at Tuesday, September 12, 2017