I did wonder why the Barnet Council monthly expenditure figures weren't posted yesterday. Today I understand why. In December Capita were paid a staggering £45 million. Yes £45 million split £39 million on the CSG contract and £6 million on the Re contract. So far this financial year that brings the total payments to Capita to £96.5 million and there are still three months to go of this financial year. 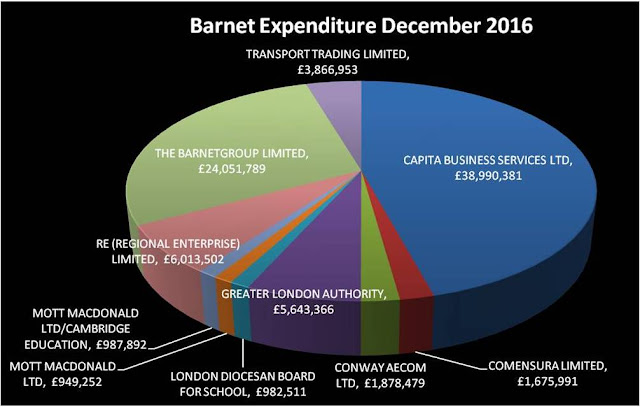 I attended the evidence gathering session for the review of the Capita CSG contract back in July 2016, the only opportunity for the public to have any input to the review process. Six months later we get a report that says everything is coming up roses with this contract. Well Councillors, if you think that shelling out £96.5 million in just 9 months is acceptable then you clearly have lost touch with reality.

I understand that at last night's Council meeting Cllr Geof Cooke asked why the ruling group insisted on holding the review of the Re contract in secret. Apparently he was told by Cllr Finn it wasn't in secret, it was in private. I have absolutely no confidence in the working group doing anything other than giving the Re contract another clean bill of health.  Perhaps if these figures had been released before the meeting yesterday, the response to Cllr Cooke's question might had drawn greater criticism - or maybe not.

I call on all the ruling group Councillors especially Cllrs Finn and Zinkin who site on the working group to reconsider holding the Re contract review meetings in public, not in private, to explain why we are paying so much to Capita and to allow residents to understand what Councillors really feel about this contract.