Supplier payments are out for September and yet again it has been a bumper month for Capita. Between the CSG and Re contracts, Capita was paid £16.3 million for September. This brings the running total to £39.5 million for the first 6 months of the financial year compared to £21.7 million for the first 6 months of last year and is more than the total value of the two contracts for the entire year, suggesting that Special Projects and Gainshare must be coining it in for Capita. Last financial year Barnet paid Capita a total of £51 million. This year, the budgeted payment to Capita is £41.8 million, see below, so if we have paid them £39.5 million in the first six months of this year there isn't a cat's chance in hell of hitting that target and I am increasingly concerned that the total payment for this year could easily hit £80 million.

To reiterate a challenge I made to Richard Cornelius earlier this year, if he can demonstrate to me Capita are saving Barnet residents money overall, I will donate £250 to a charity of his choice.

Another beneficiary has been Comensura who in September were paid £1.55 million and in the first 6 months of this year have billed a total of £9 million. I have raised my concerns about this contract previously and I remain convinced it is going to overshoot the £15.5 million Comensura billed Barnet last financial year. Also bear in mind that this contract is for temporary and agency staff  yet it follows a period of mass redundancies. Previously I was told that this was because Barnet are struggling to recruit social workers so they have having to use agency staff instead. However a hole was blown in that myth when a freedom of information request revealed that social workers made up less than 20% of the agency spend.

I also note that Conway Aecom received £1.84 million in September for all those roads that have been surface dressed with tar and grit much to the annoyance of many Barnet residents.

There were also a couple of entries that caught my eye. The first was for £118,911.02 to a company called Senator International who supply office furniture. Given the libraries services are due to be decimated especially my local library in East Barnet it does seem somewhat strange to be spending this much money on new office furniture. I was also surprised to find that Senator International are not currently listed on Barnet Council's Contract register for 2015-16. Mind, it does say next to the contract register "Created 6 months ago, modified 6 months ago"  so maybe it will find its way onto the register next time someone gets round to updating it - I wonder if there is a KPI for website updates given that procurement and website are both Capita responsibilities.

The other company that caught my eye were Shaylor Group who were paid £509,805.22 for equipment and materials purchases and instructed by the Commissioning group. As with Senator International, I couldn't see them on the contracts register. Let's hope the update comes soon.

Here are a few more  payments that have caught my eye.

The council paid TMP UK Ltd £51,501.99 for advertising and professional services. TMP UK describe themsleves as a "resourcing business that helps organisations hire and retain the right people by leveraging their employer brands". Given that Barnet is a commissioning council determined to outsource as many jobs as possible with a brand associated with cuts to vital services spending over £50k with this company seems a bit excessive.

Barnet also paid Claer Lloyd-Jones £7,500 in September. You may remember Ms Lloyd Jones was brought in last year after the Committee allocation fiasco saying that "nobody" at Barnet had an understanding of Local Government law as set out in the Barnet Times here and on Mrs Angry's blog here. I wonder why, a year later, we are paying another bill for her services - we paid her £6,000 last year on 15 August. Have the problems been resolved or have Barnet just been very late paying the bill? 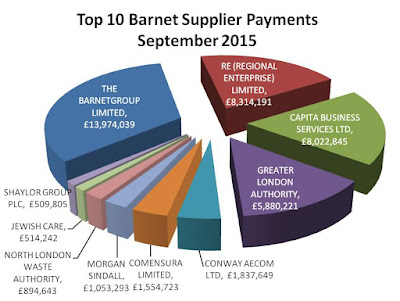 As always, I will continue to monitor the payments - I just wish some of our councillors took a little more interest in just how much we are paying out.
Posted by Mr Reasonable at Friday, October 30, 2015