The Capita contract in Barnet was supposed to help save money yet, as reported repeatedly on this blog, Capita get paid significantly more than the contract price. The forthcoming Performance and Contract Management Committee meeting discloses the most recent Capita payments.

I have highlighted all the "special project" payments which in this statement amount to £3.95 million, or almost half the total quarterly payments. It is also important to point out that the Capita contract is automatically updated for inflation. Now in my naive world I though inflation was currently zero but not in Barnet. As a result Capita's CSG bill was increased by £90,912 for the period 1 January 2015 - 31 March 2015.  The Re contract was increased by £94,865.92 for the year.

In total that is an annual uplift £458,000. Now given that Barnet last year cut council tax by 1%, that additional £458,000 has to be paid for by a cut to another budget and that is the one of the key reasons why freezing or cutting council tax is such a short sighted strategy.

We have also been charged an extra £702,317 for "additional service provider costs". I thought the contract price was supposed to be guaranteed but as with complex contracts of this nature, and as Cllr Hugh Rayner pointed out, contract variations are where contractors makes their money.

It is also interesting to note that we ended up paying £14,268 for occupational health assessments for just 2 months, a cost which was minimal before the Capita contract.

And guess what, the Conservative councillors who voted for this Capita contract never seem to ask a single question about what we are paying. 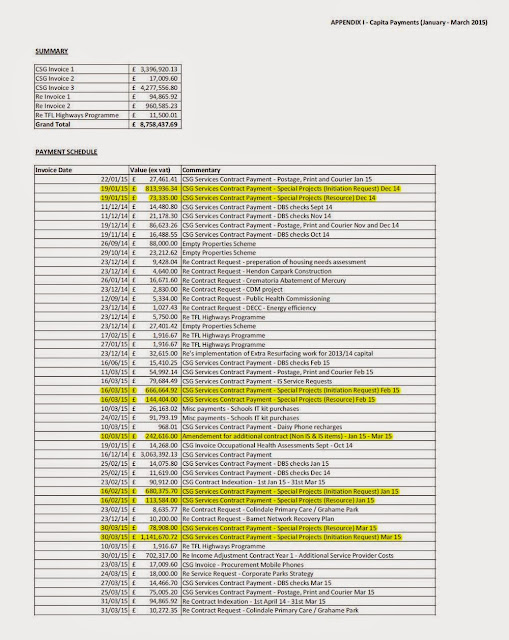