Another day another £10.68 million for Capita - The cost of Barnet outsourcing continues to rise.

The supplier payments for June have just been published and at £45 million they are up considerably on the previous two months.

Capita received £10,687,650.86.  £4.23 million was for the Re contracts (planning trading standards, environmental health etc) and £6.45 million was for the CSG contract (call centre, finance, council tax collection, housing benefit administration etc). I am assured that Capita payments are thoroughly checked by Council staff, but when dealing with so much money to just one supplier I think a greater degree of public transparency is vital.

Comensura, who Cllr Shooter was asking about at the last council meeting http://reasonablenewbarnet.blogspot.co.uk/2014/07/is-councillor-shooter-getting-straight.html were paid £1,329,285.59 in June, a rise of £271,477.11 on May's payments. So any suggestion that this is a reason for back slapping and congratulations seems a bit premature.

Other payments included £3.66 million to Transport Trading a subsidiary of TFL, £676k for Barnet Lighting for all those new street lights many of which were replaced entirely needlessly. Ridgeland Properties is the company owned by the Comer Brothers and is for rental on Barnet's offices at North London Business Park. A further £186,250 was paid out to a company called Dancastle Ltd which represents the rent on Barnet House in Whetstone.

£866k was paid out to Fremantle for the care some of our elderly residents, a company who have been the subject of blogs by the formidable Mrs Angry  http://wwwbrokenbarnet.blogspot.co.uk/2013/09/the-death-of-yuk-kiu-lee-barnet-council.html

NSL the council's outsourced parking contractor received £320k this month. I wonder if Barnet really are getting value for money on that contract?

The top 25 payments by value are below: 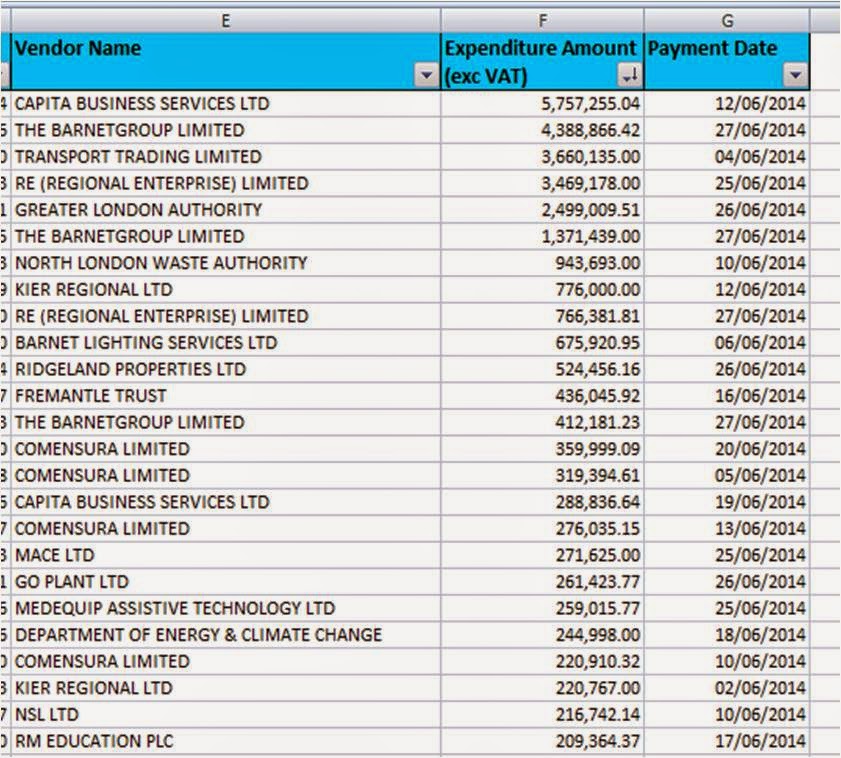 The council also paid out £18,777 in subscriptions to CIPFA Business Limited the business arm of the Chartered Institute of Public Finance & Accountancy. It may be that this is for subscriptions to services such as benchmarking but these days of austerity should mean that all subscriptions come under the closest scrutiny.

It is also interesting to see that Barnet Council paid Saracens £3,819 especially as in today's Barnet Times it say that Saracens owe several hundred thousand pounds to Barnet.

I still think that there needs to be much greater external and independent scrutiny when signing off over £45 million of payments in just one month but this is Barnet where proper scrutiny remains a wish not a reality.