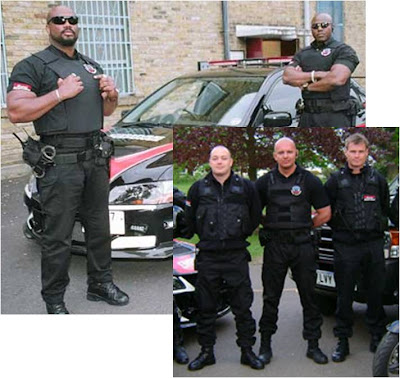 I will leave the details of the council meeting to those more competent at reporting. I will however share my experience of the evening. Turning up at the Town Hall at 6.30 I joined a queue of people hoping to get into the public gallery. After 20 minutes in the freezing cold I eventually got to the front of the queue. Ten people at a time let in. As I walked through the front door I was greeted by lines on police on either side. Up the stairs and into the chamber - ah no sorry its full, go to the room down the corridor. There was where I met some of the Private Army, security guards from a company called Met Pro Rapid Response in black army style fatigues and padded jackets. I found their presence most intimidating. Anyway the meeting kicks off and we find that we are staring at a blank screen, it is an audio link only. What a complete waste of time. Disconnected voices issue from the loudspeakers no announcement of who they are. The meeting proceeds but a number of people in our ante room simply give up and leave. Bully boys ask where are you going - you even need permission to go to the toilet! Eventually it become clear that there are 17 seats available in the public gallery. One of the Labour councillors asks the Mayor if we can be some of us in the ante room can be allowed into the public gallery. Oh no says the Mayor, the Police have advised against it. So someone came and asked the Inspector, who I have to say seemed an eminently polite and reasonable chap. Yes, 17 people can go in but ideally they should be Barnet residents. We are summoned up from the ante room and are about to be shown into the public gallery by the police when up sweeps an anxious looking Nick Walkley. No you can't go in putting his arm up and stopping me from entering. Hang on a minute the Police have just told us we can - make your mind up. Next up comes a breathless Craig Cooper - no the Mayor has said you can't come in even though we are all respectable residents and we have been advised to do so by the police. What a total and utter mess and a clear sign that democracy is not working in Barnet even though the Mayor insists it is.

Overall tonight was an abject example of a tin pot regime completely and utterly out of touch with the people they are there to represent.

Mrs Angry, you are right Barnet is broken and it is a damn shame!
Posted by Mr Reasonable at Tuesday, March 01, 2011