If you live in Totteridge or Hampstead Garden Suburb don't bother reading any further. Your homes and environment are secure. For everyone else be afraid, very afraid. Next Tuesday (14th January) a planning application will be heard for a monstrous development at the Hyde on the A5.  You can read the 122 page officer's report here but for those that don't have the time it can be summarised as  follows:
A replacement Sainsburys store of 8,998 sqm Gross Internal Area (GIA), 1,309 residential units  and 951 sqm GIA flexible commercial space in buildings ranging from 4 to 28 storeys. The numbers on the image below indicate the number of storey in each block and how it towers over the surrounding properties. 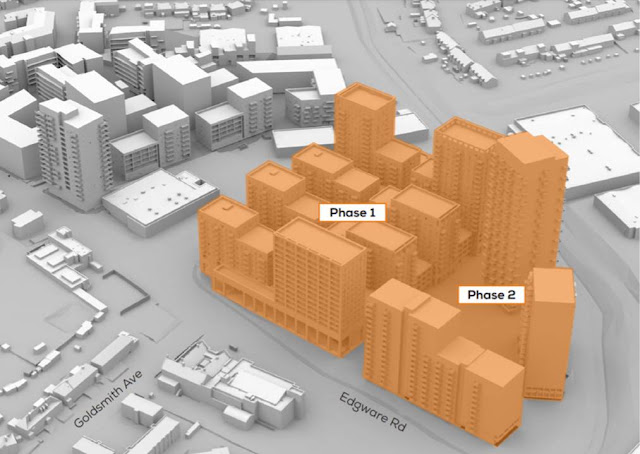 With 1,309 units that means there will be at as many as 3,848 residents (they are building 2,278 residential cycle spaces) right on the A5 and a good 20 minutes walk to  the nearest Underground Station at Hendon. There are buses that run along the A5 are already busy and with all the other developments being built near by mean that it will be difficult to get on the buses at peak times. They have only included one car parking space for every three flats (0.33 spaces per flat) but the risk is that instead of deterring people from driving it will just mean they park on surrounding streets. If it was right on top of a tube station or in a town centre there might be a supporting case for fewer but this scheme meets neither of those requirements.

The poor people who live in 11-13 Gadsbury Close will be dramatically overshadowed with only 3 out of their 8 windows meeting the target known as Vertical Sky Component (VSC) but that is dismissed in the report as "relatively minor".

What really worries me is that this development seems to have ignored key elements of the council's own planning rules. The site is not in an Opportunity Area and it is not in an area designated for tall buildings but because they are building huge blocks nearby that seems to set a precedent which can allow other schemes to break the rules.

Interestingly the Council's own Environmental Health assessment says:
"I disagree with results of the air quality modelling that claim that the Air Quality (AQ) will be okay when the development is operational. The A5 is currently very congested at times, add to this the cumulative impacts of other developments there will undoubtedly be extra traffic on the roads, resulting in AQ objectives being exceeded. At some receptors there will be 6-12% more traffic due to the development."
Don't worry we can put in some mitigation. Well actually I do worry. To the north of this site are two other developments, the Colindale Telephone Exchange Building which has planning for 505 flats and the former Homebase site which has planning for 386 flats. The Council recognises that 78% of all roads in Barnet are above the European legal limit for air pollution. In addition, all those people will need to use the buses, need doctors and dentists, school places for their children yet there is no condition that these facilities have to be in place.

All over Barnet new developments are being proposed that seem to be developer driven rather than community driven. We have massive developments proposed at Finchley Central and High Barnet Tube station car parks with many more schemes in the pipeline.  On this scheme the number of flats means that the total scheme cost will be in the region of £500-600 million pounds. Due to what they call the "viability test" it builds in a developers return (profit) of 20%+ so on this scheme the developer stands to make between £100 and £120 million. As such you can see why they are so keen to push through these huge developments. 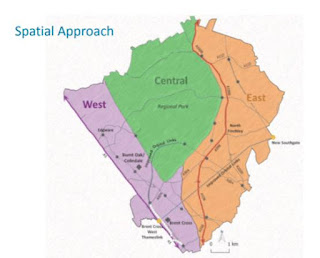 No areas in Barnet are safe other than those designated as conservation areas. The Council's Growth Strategy identifies a lovely regional park in the centre of the borough but everywhere else is up for grabs. Even worse, the London Plan Panel report recommended 35,460 new homes over the next 15 years, yet in the latest draft of the Local Plan, Barnet's planners are recommending Barnet set a much higher target of 46,000 new homes. This is all about generating more council tax revenue. This number of new dwellings would generate at least £50 million a year in council tax, helping to meet the forecast budget shortfall but it fails to recognise that 46,000 new homes means a massive increase in population all requiring services such as doctors, dentists, schools, libraries, hospitals, bin collections, social workers, care workers - which always seems to get ignored.

It is reaching the point where people have to decide if they want to live in a borough of high rise blocks of high density housing with poor facilities and heavily polluted streets or abandon Barnet for a better quality of life. I know it is something I am considering very seriously at the moment.

If you can, please do try and get to the planning meeting at Hendon Town Hall 7pm on Tuesday and show your concern about Barnet's planning policy.
Posted by Mr Reasonable at Sunday, January 12, 2020