Why Failure is Condoned in Barnet - Untouchable Capita

I know everyone want to talk about the general election but here in Barnet there are still some really serious issues that councillors seem incapable or unwilling to address. Last Wednesday we had an Audit Committee meeting. Due to the new gagging rules, residents are forbidden from speaking to the committee or submitting a written comment and have severe restrictions on the questions they can ask, which means that at least 29 of my 32 questions would have been refused.

The big issue at Audit was the internal audit reports on Highways and Accounts Payable, both services run by Capita. Highways got a "No Assurance" rating - the worst possible - with some real horror stories about the absence of quality checks on work undertaken by contractors and the failure to check what we are paying for. Accounts Payable got a "Limited Assurance" rating with concerns about people who were authorising invoices above their authorisation limit and failure to implement systems to identify duplicate payments. We also heard that there is another fraud using seven different false bank accounts, although details were sparse as it is subject to a criminal investigation.

What annoys me more than anything is the deference shown by councillors to Capita and their unwillingness or inability to look at how often they fail. One councillor even thanked the man from Capita for attending the meeting, even though Capita's failings on this area - Pensions Administration - has brought fines on the council and the first time The Pensions Regulator (TPR) has issued an Improvement Notice to a public sector pension scheme.

I have repeatedly said at Audit Committee meetings that there is a failure to follow up on previous problems identified by the Internal Auditor. They have introduced a system to identify actions which have been recommended by Internal Audit but not implemented by the agreed deadline. There seems no sanction for repeated failure to meet deadlines. Two recommendation have missed three deadlines for implementation, which is bad enough, but what councillors fail to recognise is that even when recommendations are implemented, it doesn't mean the problems will not reoccur. To prove this point I went back through all of the Limited and No Assurance reports back to 2014,  set out in the table below, and the same problems keep cropping up. What you also see is that the vast majority of these poor ratings are for services provided by Capita. Indeed, things got so bad that in April that two major services, Finance and HR, were brought back in house because of Capita's dismal performance. What I question is why so many of the other under-performing services, including the two highlighted at the most recent Audit Committee, remain under Capita's control when they have demonstrated their failure to sort out the shortcomings. 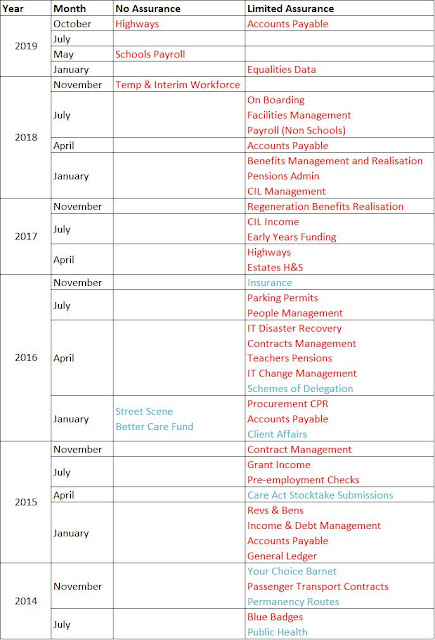 Accounts Payable, based in Chichester, has received four limited assurance ratings in the last five years. To any sensible person that would suggest that this is a failing service and that Capita cannot be trusted to continue running it. When the finance function was brought back in house in April, the obvious choice was to include Accounts Payable, as it is such an integral part of Finance, but not so. We are also stuck with Capita's Finance IT system, Integra, which has repeatedly been flagged up as having shortcomings, so it is like the car analogy I gave to the Audit Committee (when residents were still allowed 3 minutes to address the committee) with someone in charge of the steering wheel and someone else in control of the accelerator and brake. Net result, car crash, and that is what we have with Capita in Barnet. What I cannot accept is that Councillors seem unable to take this long term perspective and that Conservative councillors simply refuse to criticise Capita, all the time claiming that these outsourced service deliver cheaper better services - they don't.

Capita has achieved a unique status in Barnet, untouchable, irrespective of the dismal performance they provide. That is not in the interests of residents.
Posted by Mr Reasonable at Sunday, November 03, 2019