Supplier payments for January - have we got a clear picture of agency costs?

The biggest issue in the latest set of supplier payment figures is the inconsistency in the interim and agency staff costs. I have been concerned that since the change over in contracts from Comensura to SCM Matrix we aren't getting reliable cost figures. In December the bills from Matrix were £824,900, much lower than I would have expected. However in January the bill was £1,413,389, almost £600,000 more. We have yet to see the breakdown of the costs and which departments increased their use of agency staff but such large fluctuations seem indicative of wider issues. In fact the January figures are the highest since last August.

I would also point out that there are also significant payments to two other staff agencies for what appears to be two members of staff. In January Barnet paid Gatenby Sanderson £18,731.31 and Hampton's Resourcing £11,363.64 and the total payment to the two agencies since January 2018 is £425,536. As far as I am aware this payment is for just two members of staff and if anyone from Barnet Council would care to correct me, please let me know how many staff are involved. What I would also say is that at these sort of salaries, these staff members should be listed in the senior staff salaries list which Barnet are obliged to publish by law and which you can read here.

In total, the agency costs excluding the two above are so far at £13.49 million with two months to run before the financial year end. I am still not convinced the cost includes all the agency staff recruited to sort out the mess on the refuse service but we have to wait another couple of weeks before we get a scale of the problems there. 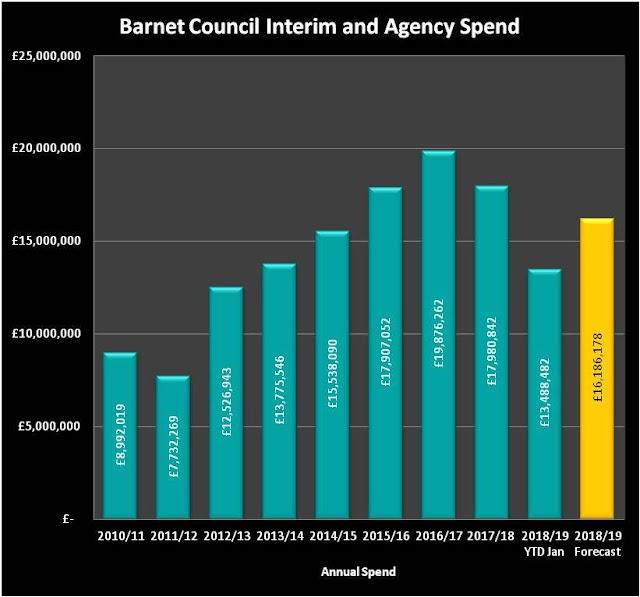 The Capita and Re payments this month were just under £2 million this month once credits of £147,063 were included. However I haven't seen any details of the £4.12 million Capita are supposed to be refunding and which should have gone through in January.
The running total for payments to Capita & Re are set out below: 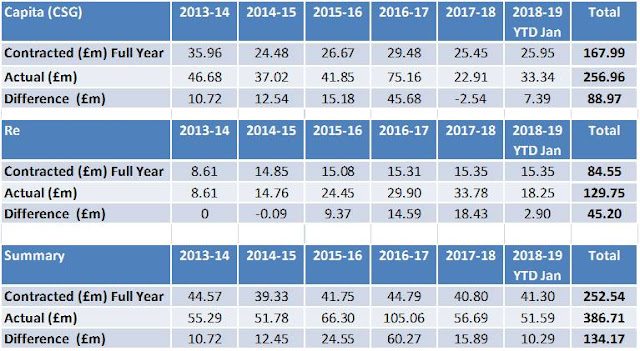 The top ten suppliers chart show that yet again the biggest slug of money is going to the Barnet Group; Conway Aecom have the highways contract and John Graham Construction are building the two new leisure centres at Copthall and Victoria Recreation Ground. 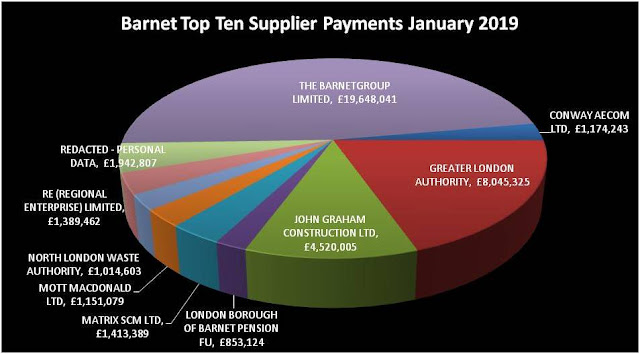 As always, I will continue to monitor Barnet's spending.
Posted by Mr Reasonable at Wednesday, February 27, 2019