On Thursday evening we witnessed fracture lines opening between the old and new guard of Barnet Tories, a meeting that satisfied no one and yet again highlighted the terminal failings delivered to us by Capita.

With seven speakers and 68 public questions this was always going to be a lively meeting but I am not sure anyone had quite anticipated the frustration and annoyance that was expressed by members of the public. Each of the seven speakers gave their three minutes with little or no questioning. Even with so little feedback there was still only time for 3 of the 68 supplementary questions.

There were two main items on the agenda; the first was the review of the Grant Thornton (GT) report and second was a run through of the internal audit reports. Most of the audience were familiar with many of the issues in the GT report because it was discussed in October at the Financial Performance & Contracts Committee. However, the biggest revelation that emerged was that a number of the committee members had not been provided with an unredacted copy of the report. The public are used to being treated with contempt by the council, but for councillors and the two independent co-opted committee members who are being asked to review a serious financial investigation not to be given a full copy of the report is inexcusable. Cllr Alison Moore asked for unredacted copies of the report to be given to members immediately. Lots of rumblings and patronising comments but it went to a vote.  Imagine the shock when new Tory Cllr Alex Prager voted with Labour and Cllr Laithe Jajeh abstained and the motion was carried. These two young councillors will need to be taken more seriously. Cllr Prager is an accountant and Cllr Jajeh is, I believe, a lawyer. They have the potential to bring a different perspective to the committee. Time will tell if the whip is brought to bear on them or if we will see a bit more independent thought from the Tories.

There were reports from the S151 officer, the assurance director and the GT staff. The one group unrepresented on the night were Capita, the company who were in charge of both the regeneration team where the fraud occurred and finance team whose lack of suitable controls allowed 62 separate fraudulent transactions to go unnoticed. The Internal audit function failed to identify this problem and agreed that they would have to put more resources into this area. Yet just a couple of years ago I challenged both Internal Audit and the Corporate Anti Fraud Team about the number of days allocated to reviewing the CSG and Re contracts but as always my concerns were ignored.

The reports were noted and the S151 Officer and his team went through all the systems they have now implemented to ensure this doesn't happen again. At one point Cllr Kathy Levine made the comment that if we (the council) are doing all this work for them (Capita), why don't we just do the job ourselves. She makes a perfectly valid point. We are paying Capita ,who do a lousy job and then sort out the mess that ensues. Cut out Capita and just bring the service back in house.

A vote on the report was deferred till the end of the meeting when Cllrs went into private session to read and discuss the freshly printed, unredacted, GT report. We don't know what was said or what they agreed so no transparency there then.

They then moved onto internal audit findings. Now I suspect that many of the committee members had not read the full report as it was buried away; a hyperlink in the summary report leads to other hyperlinks which eventually take you to the report. I have mapped out the click trail below: 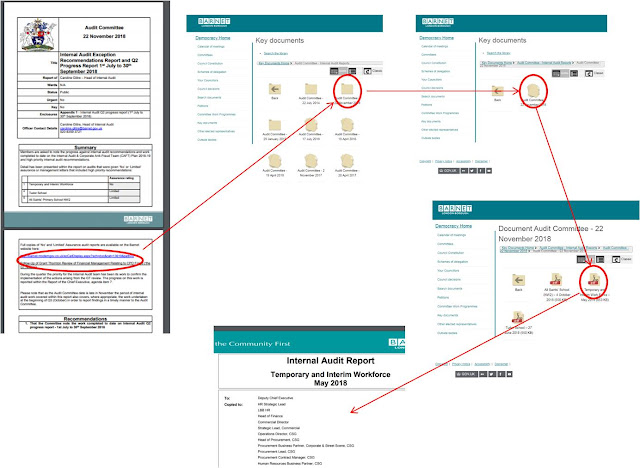 The report gave no assurance, the lowest possible rating to the Temporary & Interim workforce service, a contract which is managed by Capita and for which they have claimed several million pounds in gainshare. It is a shocking report which you can read here.  Examples include:

On DBS Checks:
"Four individuals (2 x Passenger Transport Escort - Level 2 and 2 x Passenger Transport Driver) indicated that they would normally be required to have DBS clearance due to the nature of their roles and contact with vulnerable residents. We looked at the compliance tab within the agency staff system for each of these individuals but none had details of DBS clearance in place,"  and
"The supplier is supposed to audit suppliers regularly (six monthly for all agencies, three monthly for social care agencies) to assess compliance with statutory requirements in areas including immigration status, DBS checks and IR35. The six-monthly audits are supposed to be reported on to Barnet, but the three-monthly ones are only reported if requested. Only one audit report has been produced since the inception of the current contract, which was sent by the supplier to the Council in February 2017."
The risk identified was as follows: "If agency staff are not subject to the relevant vetting for their post, there is a risk that inappropriate appointments will be made, leading to financial loss, increased safeguarding risks and/or reputational damage for the council."

On Monitoring:
"18 (individuals) had their assignments extended beyond the initial assignment length. We looked at the records of approvals within the workflow inbox and requested supporting evidence from the supplier for the most recent assignment extensions for these individuals (all dating from after September 2017) and were not able to verify that the required permissions had been obtained for these extensions in line with the agreed workflow for extension approvals for 17 of the 18 extensions (94%)."
The risk identified was as follows: "If the Council does not have an overview of the length of service of agency staff, there is a risk of financial loss to the Council where a permanent post would be more appropriate, or where agency staff gain additional employment rights through length of service".

Personally, I find all these matters shocking especially as some of them were flagged up in 2014 and again in 2015. The response from the council is "we are changing the agency contract". What they failed to acknowledge is poor contract management, that is carried out by Capita and I see no prospect of their service improving. Worse, I see the Audit committee who have a responsibility for risk management failing to take any actions which would see the situation improve.

On 11 December we are scheduled to have a Policy & Resources Committee which will discuss the business case of which Capita services will be brought back in house. We know that this includes the Finance function excluding transaction services which will remain in Darlington and Strategic HR. I think that will be the totality of services. I also have a very worrying suspicion that the deal done by Capita to pay Barnet £4.12 million to resolve "historic (sic) commercial issues" is aimed at heading off any other services being brought back in house.