The supplier payments for June have just been published. This month the big winners are Capita  who billed £10.7 million on the CSG and Re contracts. Comensura billed £1.45 million and looks like we will hit £19 million over the full financial year.

For some reason NSL who administer parking and litter enforcement billed £1.77 million in June which seems excessively high.

PA Consulting also billed another £134,917 this month, on top of the £685,804 they bill last month. One of the invoices this month was for "Supp People Recharge". I wonder what this is for but  as it was billed to adults and communities I wonder if has anything to do with the failed implementation by Capita of the Mosaic case management system that we heard about earlier this month. I shall be asking a few follow up questions I think.

I also wonder what we paid OCS Group £110,161 in June, bringing the first three months billings to £278,541 given that we already have a cleaning contractor, Churchill Contract Services.

The payments to John Graham is for the construction of the two new leisure centres and the Conway Aecom is for highways work. 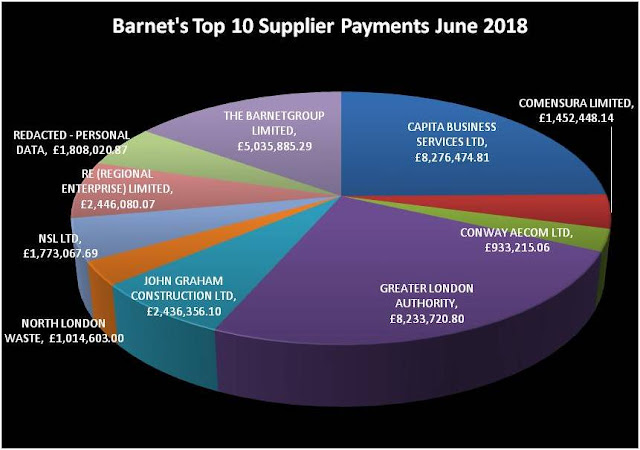 The latest payments to Capita on the CSG and Re contracts bring the running total to £350.8 million. I still cannot see where the mystical savings are being generated.

As for the Comensura contract, the current forecast for this financial year is £19.1 million, some £1.2 million higher than last year, at a time when there are supposed to be cuts to interim and agency costs so as to avoid another massive financial overspend.  We were due to have an update of the council's financial performance on 18 September (which was too late in my opinion)  but that meeting has now been postponed another three weeks till 9 October. My very real fear is that by the time we reach October everyone will be throwing their hands up in horror at the overspend but by then it will be too late to do anything about it.

As always I will continue to keep a close eye on Barnet's spending. 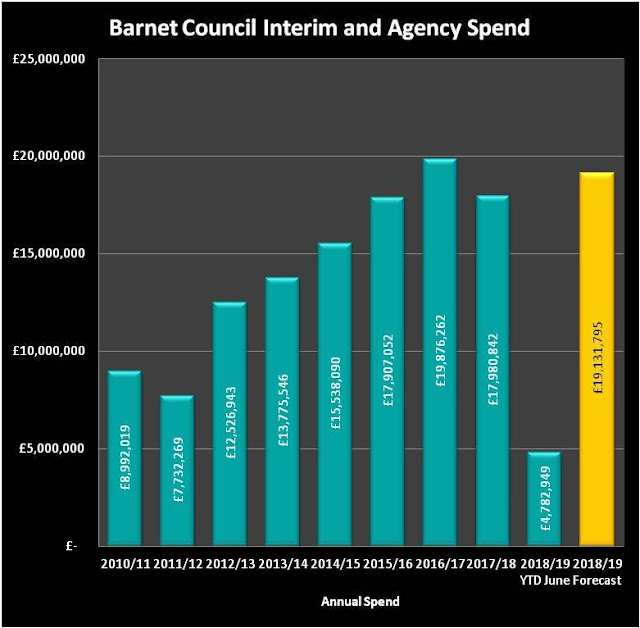