Wednesday was my birthday but rather than spend a pleasant evening with my family sharing a slice of cake, I trudged off to Hendon Town Hall to attended a public consultation meeting on the proposed new committee system that the council wants to introduce next April. Sadly, very few member of the public were there - just 17 along with 9 Councillors and numerous Barnet Council staff members. As is the way with these "public consultations", the whole process was heavily stage managed with no off-script questions and no real debate about why we are changing the system.

The Council's research indicates to me that the public are largely disengaged with the council. Only 7% of respondents said they had been to any council meeting and more than two thirds of respondents said they didn't even know who was their Councillor. I spoke previously at the Constitution & Ethics Committee about the lack of engagement and the failure of the proposed new system to address that problem which I blogged about here.

The public where spilt up onto pre-assigned tables each with a council officer acting as a facilitator so that we could discuss four specific questions about the new system. As luck would have it Richard Cornelius briefly joined our table so I took the opportunity to ask him a couple of questions which were:


Now to me these are two both reasonable and fundamental questions which should be clear at the outset of any project. A few awkward looks and then a reply from Richard, "to involve all the Councillors in the running of the council and to make the Full Council meeting meaningful". Both those answers highlight where the problems lie in the proposed new system.

This new system is all about giving the other 53 non cabinet Councillors something to do, otherwise how could they continue to justify the £1 million spent on Councillor allowances each year. By the way if you are not sure how much your Councillor was paid last year I suggest you take a look here. It is very revealing just how many Conservative Councillors are paid more than basic annual allowance of £10,596.96. In  fact 75% of all Conservative Councillors receive some form of special allowance for additional duties. As for making the council meeting meaningful. that illustrates what a pantomime it currently is run at significant expense.

Several people on my table seemed to think that the skills and experience of Councillors would come to the fore under the new committee system. Sadly I think that will not be allowed to happen under the new system where the ruling group will always want complete control.

I would like to see residents become much more involved and to devolve far more decisions down to a ward level but with the proposed, incredibly complex structure it will successfully exclude almost everyone except Councillors because it will be impossible to attend all the meetings. A chart of the initial draft structure  is set out below: 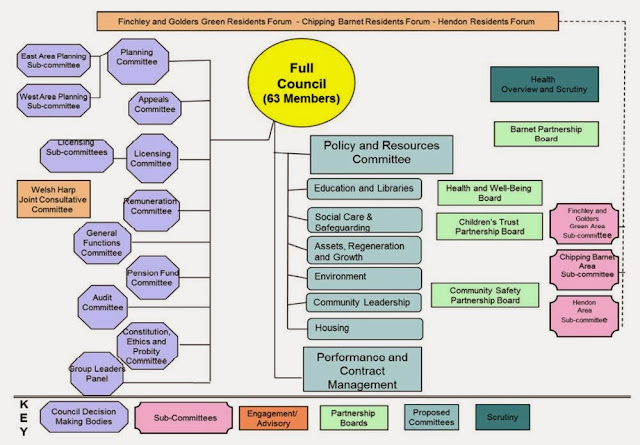 The chart shown on the evening was slightly different to chart above but it is close enough and there is no electronic version on the new chart available.

Feedback from several of the discussion groups was that there was not enough information upon which to make informed decisions, but no surprise there. We shall have to wait and see what transpires at the next Constitution & Ethics Committee  meeting in December but how they can base anything meaningful on the views of 17 people that will affect the way the council is run for the next five years is beyond me.

Perhaps instead of finding jobs for the boys they could cut the number of Councillors by two thirds and actually make the current system work effectively. At least it would save us around £700,000 a year in Councillor allowances.