I was going through Barnet's supplier payments for October 2022 (£71.7 million) and I cast my mind back to January 2011. At that time the council implemented something called Pledgebank where residents could pledge to carry out some activity on behalf of the council/community. My pledge was as follows:

“I will pledge to give up 4 hours of my time every month to scrutinise and challenge all invoices over £10,000 to help the Council reduce unnecessary spending so long as five other people will make a similar time commitment to sit on the panel and that Barnet Council will genuinely participate in the process and listen to the advice and opinions given.”

Strangely, the council never took me up on my pledge although, rather than decline it, they left it hanging, "undecided" as they put it. You can read about it here.

Why I raise it now is that when costs are so tight and we potentially face serious cuts to services due to the impact of the crazy mini budget of 23 September, every penny spent must be carefully watched and if necessary challenged.

This month, excluding redacted payment, we paid 1,021 suppliers £69.27 million. The top 20 suppliers were paid £48.83 million or 70.5% of the total spent. Looking at individual payments there were a total of 14,811 of which 521 were for £10,000 or more, around 3.5% of the total invoices. Excluding payments to statutory authorities, that number falls further. Maybe now is the time to revisit that pledge?

Barnet also spent just over £2 million on agency staff in October which brings the year end forecast to £18.2 million, up on last year and set to be close to the peak year of 2016/17. 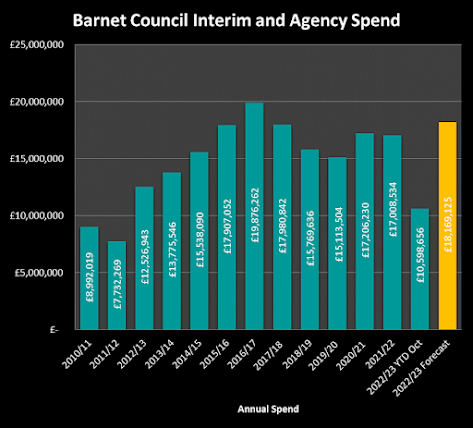 And just to update you on Capita, the running total is now £622.74 million. Scrutiny is more important than ever.