Capita still costing us a fortune

I was a bit worried that the supplier payments still had not been published for September 2022 so I dropped a quick email to Barnet yesterday. Almost by return, they came back saying thanks for pointing it out but they had been published the figures somewhere else on the website by error and that had now been corrected. Since the finance function has come back in house they have always been helpful and very responsive.

The running total since the start of the contract is now £618.61 million, £257.73 million more than the contracted value.

It is also important to remember that the contracted value includes the cost for services that have already been brought back in house such as finance so the true cost is even higher.

Other noticeable costs include the running total for agency staff at £8.5 million with a forecast year end cost of £17.1 million. 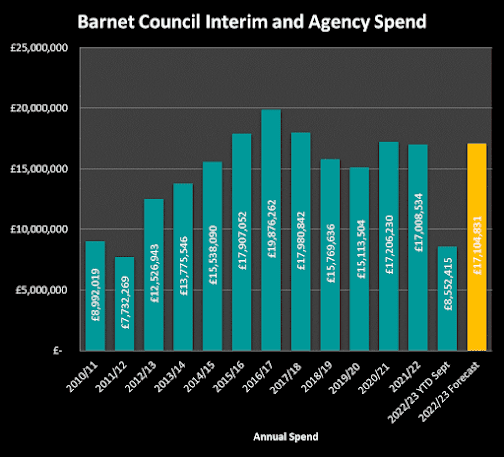 It is also worth noting that, in the first six months of this year, Barnet have paid out £28.57 million on the Brent Cross project. I remain concerned at the level of risk Barnet is exposed to on this massive redevelopment project.

Listening to what is happening at other local authorities, I think we are in for a serious financial squeeze with the impact of inflation on pay rises, increased energy and construction costs, and contracts which include indexation clauses (such as the Capita contract). Now more than ever it is essential that there is a high level of scrutiny on every pound spent within Barnet.

As always, I will keep monitoring the spending at Barnet.