As readers will know, I have followed the two Capita contracts in Barnet since the very outset when the outsourcing of so many council services was first mooted. To date, Capita have been paid £555 million and there are still just over two years of the contract to run.

The difference between the contracted sum and the total paid currently stands at £218 million, a large amount around which there is very little transparency for these additional or 'extra' charges. It was a Conservative Councillor, Hugh Rayner who asked the obvious question before the Capita contracts were let. He said that he likes extras, changes or variations to a contract because that is where he made his money and challenged officers to tell him how we would avoid this situation with Capita. Sadly he was right and the over optimism of politicians, consultants and officers at the time has proved very expensive. (Credit to the late Barnet Bugle who filmed so many of those council meetings providing a permanent record of the mistakes and blunders made by councillors).
Each year there is a period of 4 weeks when any resident can inspect the accounts and this is my annual opportunity to see precisely what 'extras' we are paying for and question whether it is valid or appropriate. This year I requested copies of  439 invoices reconciling the total £54.28 million paid to Capita and in particular what the £21.6 million of extra payments included. It takes a bit of time to not only go through all of those invoices but to understand the specific breakdown of what they include.

At this point I have to give some praise to Barnet Council. Yes you read that right, praise, specifically to the council staff in the finance department. Barnet brought the finance function back in house from Capita a couple of years ago after a range of problems. I think the staff know me reasonably well so this year when I asked for copies of all the invoices and breakdown of what they related to I was surprised that even though I had put in my request early, assuming it might take them up to three weeks to compile, I was sent a fully detailed set of invoices and back up within 24 hours. So well done to all the Council finance staff  - excellent service!

Reading the details of what was in the invoices is both worrying and puzzling in that I keep asking myself why on earth this contract wasn't brought back in-house years ago. Set out below is a summary of the main categories of spending on the 'extras'. 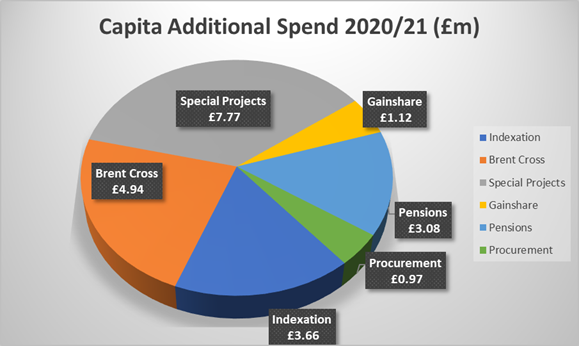 The first three are items which there is limited room for manoeuvre:
Pensions is what Barnet have to pay for additional pension costs for staff who transferred over with the contract including payouts and changes to the scheme. We don't have any choice over these payments.
Indexation is the uprating of the contract value in line with the inflation rate. I am sure many people who have seen their pay frozen or cut over the last 8 years would welcome a clause where their pay automatically rises by inflation each year. Most other council departments have no guarantee that their budgets will be increased by inflation but it is a contractual clause so we are stuck with it.
Procurement is where Barnet request additional item, I understand this is mainly IT equipment. As it is stuff that Barnet have specifically requested then, again, there is little we can do about that.

We then come on to the other three headings which are more interesting and where I have real concerns.

Gainshare is a term whereby Capita share in any savings that they make on behalf of the council. In the past this figure was much larger as it included savings made on procurement. I have fought these from the outset of the contract and exposed what a sham they were. Eventually after much hassle from me and from the my challenge to the accounts being overdue for two years, a settlement was reached with Capita whereby gainshare was removed from procurement items. I was told by someone who should know (I will not mention their name to save them the embarrassment) that my persistence had "saved the council million of pounds" by getting the clause removed. They also urged me to keep looking and keep questioning. This year the majority of gainshare was generated on  three areas, council tax collection rates, removal of single person discounts, savings on court costs. This year Capita received £480,197.59 for achieving council tax collection rates above the target set out in the contract. It related to this year and if they managed to recover unpaid council tax in previous years.

For both Council Tax Collection rates and single person discount removal, I have always felt that we should not just be handing over so much money when there are skilled people within Barnet's own team of staff who could pick up on this. We have a Corporate Anti Fraud Team (CAFT) run by an experienced senior officer who already investigates, tenancy and right to buy fraud, blue badge, freedom pass and parking permit misuse as well as larger corporate frauds, such as the £2 million fraud undertaken by a Capita staff member back in 2018. They also "use internal data matching in order to develop more data led pros-active investigations and allow CAFT to have a greater ability to investigate and adopt a preventative measures approach to a number of council services". If they were given just a small percentage of that £750k paid to Capita to add to their team, we could save the rest for important services the council is currently being forced to cut.

There were a number of other gainshare sums including £76,000 on Estates gainshare which is where they exceed targets on rental from commercial properties owned by the council.

The next large area of costs is Brent Cross where Capita billed £4.94 million in fees for work on various elements of the Brent Cross redevelopment. Until August last year Capita were also responsible for project managing the new Thameslink station at Brent Cross. However, they were replaced by a company called Mace who also billed £1.38 million in professional fees. To be clear the Capita costs are just for their fees not for actually building anything. Last year  2020/21 Barnet spent £70.8 million on the Brent Cross project, up from the £45.5 million spent in 2019/20.

Credit: Brentcrosstown.com
The last area is Special Projects of which there have been many over the years. These are individual projects that have been commissioned by Barnet and on which Capita have an automatic right to operate without the need for a competitive tender. In the past I have been told that the day rates are competitive with other external companies but the issue here is not just the day rate but just how many days are billed.

One of the largest special projects this year includes £2.28 million on the Hendon Hub where
Capita provide professional services for the development and submission of planning applications and the Final Business Case. That is an awful lot of time for a project that isn't even built yet and there are likely to be additional charges and the work continues in this current financial year. They also billed £37,639 for "Heritage Advice" on the scheme. 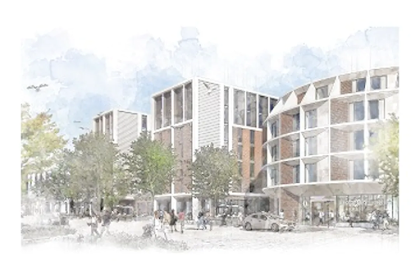 In addition we paid:

There were lots of other project although a few that caught my eye including:
To all of this you may say "So What?" My concern is the lack of transparency about so much of the goings on in Barnet, something they have been making even more difficult as the years go by. We are gagged at meetings, and the amount of information they used to produce has been reduced. For example, Barnet used to produce a quarterly, one page summary of the benefits the Capita contract had generated (Benefits Realisation). When I started asking questions about the numbers, Barnet's response was to stop publishing it. I used to analyse the senior council staff salaries from data they published. One day they just stopped publishing it. I never published staff member names even though it was available only ever their title. Now we haven't a clue other than for the top handful of staff. Even worse they removed years of historical salary data that had already been published.
I do this because someone has to try and hold the council to account!
Posted by Mr Reasonable at Thursday, September 09, 2021