Why Capita's Gainshare is Such a Rip Off - Day Two

Yesterday I blogged about three gainshare payments which you can read here. Today I have three more examples of why the idea of gainshare seems at odds with the principles of public money being used for public service.

(Just in case anyone isn't aware, "Gainshare" is a contractual mechanism by which Capita is entitled to a share in savings they make for Barnet).

Example 1 - the Double Bubble Trick
For the last four years I have been complaining about the gainshare Capita has claimed on the Interim and Agency contract with Comensura. I remain convinced that we have been ripped off to the tune of several million pounds and it formed the basis on my objection to the accounts both in 2014 and last year. Interim and agency costs have risen alarmingly since 2011/12 : 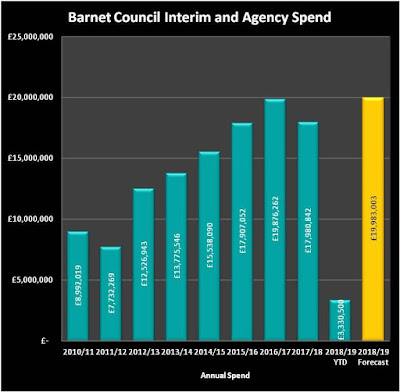 In 2016/17 we paid a gainshare on the Comensura contract of approximately £1.3 million. Last year there was a big push to reduce the number of interim and agency staff as can be seen in the chart above. So imagine my surprise when I saw a gainshare claim for £250,000 for "HR Agency Transfer". When I queried this payment I was told that "this relates to work undertaken by HR to convert agency workers onto permanent contracts thereby helping to reduce agency spend and stabilise workforce, which led to a cost reduction of circa £800k per annum".  So for the last four years Capita have claimed  millions in gainshare on agency costs as more and more agency staff are used and then they get another £250,000 gainshare for helping to convert those agency staff to back to full time employees. I have no confidence that the £800,000 saving figure is real, but as is the way with all gainshare payments, Capita put in a claim of forecast savings and then carry out a "true up" at the end of the year when the actual savings are reconciled against the initial claim. To me this just seems plain wrong, especially as part of the switch from agency to full time staff has been driven by HMRC's clampdown on IR35 tax avoidance which has forced a large number of interim staff across the public sector to change their employment status.

Example Two - Pile up the costs and still claim the saving
If you are a single person in a property you can apply for a single persons discount (SPD) of 25% on your council tax bill. Capita get a gainshare for reducing the number of people claiming this discount. What they can also claim is the costs of carrying out the work. In 2017/18 Capita submitted a gainshare bill for £174,117.77 for the SPD reduction. When I asked for the supporting evidence I was surprised.  The gainshare is calculated based on the "total payments collected above the baseline". This was £315,000. However, the cost of carrying out the work to achieve that saving was  £127,000  giving a net saving of  £188,000 on which we paid 25% gainshare, equivalent to £47,000. Now bear in mind that Capita can charge their staff out at consultancy rates as set out here to carry out this work and on which they also make a very sizeable mark up. So from an increased council tax income of £315,000, Barnet actually gets to keep just £138,000.

Examples Three/Four/Five - It's all about the budget
There are a number of gainshare claims which are all broadly similar. Capita ask what is the budget for a service.They then tender the service and where it come in below the budget, Capita take a gainshare on the difference.
One example is for Family Systemic Training. Capita asked for Barnet's budget which Barnet said was £30,000. Capita tendered the training and picked the lowest price bid at a price of £11,400. Capita said fantastic we have saved you £18,600 so with a gainshare of 31% they billed and were paid a gainshare of £5,766. So for a service that cost £11,400 we ended up paying £17,166. In my world that is plain wrong.
A similar situation arose when tendering a tree policy consultation. The council set a budget, there was a tender on the council's own etender portal, the bid came in much lower than the budget so Capita picked up 31% of the difference.
The third example of budget driven gainshare is on document storage. Previously archive boxes were stored at the archive section of the Mill Hill Depot which has now been flogged off for housing. Barnet House and NLBP are tight for space so Barnet needed to make use of an external storage provider. Capita, asked for Barnet's budget for storage and were told it was a round £500,000. Capita went to Stor-a-file who offered them a price forecast to be £359,296 over the next five years, including an initial free 6 month period. Capita said woohoo that's a saving of  £140k or £28,200 a year so we are entitled to £11,280 of that each year. In addition, they claimed (I believe incorrectly) an additional gainshare on the 6 month free period. In total the gainshare fees over the next five years is £68,370 just because an officer set the budget too high. So instead of paying £359,296 which is the actual cost the supplier charges, we are paying £427,666.
Maybe now you can understand why I compare this gainshare process to BBC Rogue Traders and why we must take back control of this money spinner from Capita.

Labels: Barnet Council, Capita, financial rip off, we are being fleeced